Indian family who gave out more than 2,000 face masks granted permission to stay in Ireland

The Singh family, who currently lives in a Direct Provision Centre in Co Cork, arrived in Ireland from India four years ago seeking asylum on religious and political grounds. 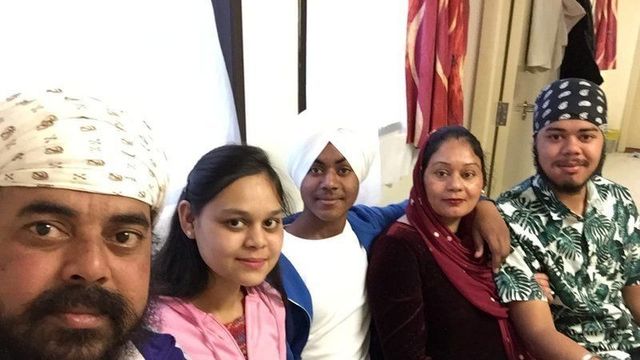 An Indian family who gave out more than 2,000 homemade face masks during the Covid-19 pandemic has been granted permission to remain in Ireland.

The Singh family, who currently live in a Direct Provision Center in Co Cork, arrived in Ireland from India four years ago, seeking asylum on religious and political grounds.

However, in January 2020, the family was informed that they could not remain in Ireland and that they would be deported back to India.

The Singh family appealed the decision, while an online petition campaigning against their deportation received more than 3,500 signatures.

On June 15, the family received news that their appeal was successful.

Raminder Singh told the Irish Examiner that he, his wife Harinder Kaur, and their three adult children Sandeep, 23; Gursewak, 21; and Gurcharan, 19, are delighted and "so happy" about the decision.

Raminder and Harinder made more than 2,000 cloth face masks during the pandemic and handed them out to people in Cork City for free.

“The way we think is if there is any problem, and you can help, you have to help,” Raminder recently told The Echo, based in Cork.

Sandeep completed three years of beautician training during her time in Ireland and plans to open a salon in Cork City, while her brother Gurcharan plays cricket with the Cork county cricket team and hopes to play for Ireland in the future. Gursewak, meanwhile, has been a member of the Citadel, a world music band based in Kinsale.

Roos Demol, CEO of Recruit Refugees Ireland, welcomed the news that the Singh family would remain in Ireland, adding that the Singhs had become like a family to her during their "real fight" to stay in Ireland.

The family will now focus on securing accommodation that will allow them to move out of direct provision.

“I want to keep working, pay my taxes, and eventually buy a home," Raminder told The Echo.

He added: “I want to thank the Government and the Minister for Justice. The Irish people have been very good to me, they have supported me so much. So many people have helped me. Too many people.”