Pamela Uba lived in direct provision for a decade before completing a master’s degree and going on to work in Galway University Hospital. 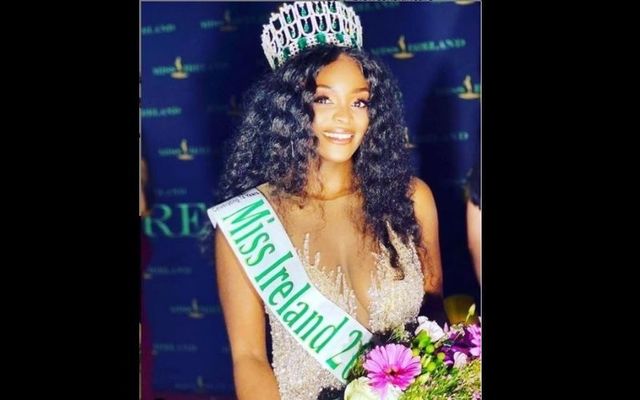 Miss Galway Pamela Uba, a frontline worker at University Hospital Galway, has made history by being crowned the first black Miss Ireland.

Pamela Uba claimed the title of Miss Ireland ahead of 29 other contestants at the Lakeside Manor Hotel in Cavan last night.

Speaking to the Independent.ie about her historic win, Pamela said: “It was a surreal experience and I’m so delighted. I couldn’t believe this actually happened.

“Even being Miss Galway for a year and a half, it was a long time coming, I thought the pageant would never happen. I am so happy and the outcome is amazing.”

After living in direct provision for ten years, the 25-year-old said she wanted more for her life.

“It was 10 years of my life, and it’s 10 years that you’re left in a standstill, you don’t know if you’re ever going to get out of it or what life is going to be.

“At the time, the rules of going to college and working were that you couldn’t really do either so it’s very hard, especially on young girls.

“Because they finish secondary school and they look at themselves and think what’s next?

“But there’s nothing really next for them then, so they have kids really young, and I knew that that’s not what I wanted – I wanted more for my life so I really pushed to get there," Ms. Uba said.

Ireland's Direct Provision program was initially created as a short-term solution to accommodate people seeking asylum providing them with food, board, and basic necessities for no longer than six months.

However, due to significant delays in the asylum process, most people spend an average of three years in Direct Provision and in some cases more than seven years.

Pamela's mother fundraised €9,000 for her daughter to go to college. “Whatever she could do, she did for me to get there. Even myself, I tried to get cash-in-hand jobs or babysitting, whatever it was to be able to get there."

Ms. Uba, whose family moved from South Africa to Ireland when she was seven years old, went on to graduate with a master’s degree from Trinity College in clinical chemistry and now works in Galway University Hospital.

She will now progress to represent Ireland at the 70th edition of the Miss World which takes place on December 16 in San Juan, Puerto Rico.