The UK Government announced the Rwanda plan last month as part of a crackdown against illegal immigration into Britain. 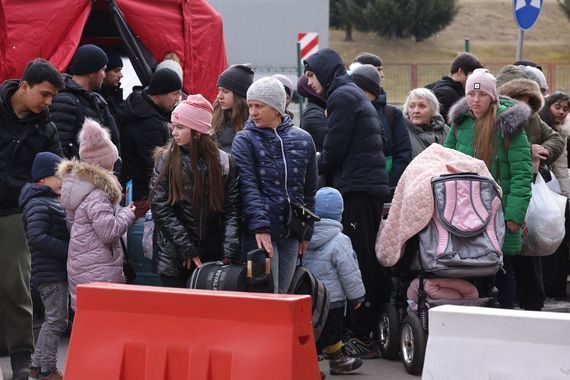 March 2, 2022, Ukrainian refugees at the Korczowa crossing on the Polish border. Getty Images

Ukrainian refugees who enter the UK via Ireland could be sent to Rwanda as part of a controversial new British border plan.

The UK Government announced the Rwanda plan last month as part of a crackdown against illegal immigration into Britain.

Most migrants who enter the UK illegally are now deemed inadmissible for asylum if they travel through safe countries before their arrival.

Anyone identified by the British Government as being an illegal asylum seeker can potentially be relocated to the African country of Rwanda for processing, asylum, and resettlement.

A British immigration official has now warned that Ukrainian refugees who enter the UK via Ireland without the proper papers could also be relocated to Rwanda as part of the plan, according to a report in the Washington Post.

The publication reports that some Conservative MPs are concerned that Ireland's decision to lift all visa requirements for Ukrainian refugees provides a gateway for asylum seekers to enter the UK thanks to the open-border arrangement that Ireland enjoys with Britain.

Dan Hobbs, the British Home Office's director of asylum, protection, and enforcement, appeared before a select committee hearing on Wednesday and did not rule out the possibility that Ukrainian refugees may fall under the scope of the Rwanda plan.

"Depending on the individual circumstances, they may not fall in the ‘inadmissibility’ criteria," Hobbs told the hearing.

Stuart C. McDonald, a Scottish National Party MP who questioned Hobbs on the matter, told the select committee that he feared Ukrainians who entered the UK via Ireland could end up in Rwanda.

"You are leaving open the possibility that Ukrainians who have crossed from Dublin to Belfast could conceivably end up in Rwanda," McDonald told Hobbs on Wednesday.

Tom Pursglove, a Conservative MP who has been serving as Parliamentary Under-Secretary of State for Justice and Tackling Illegal Migration since 2021, told the hearing that there was no reason for Ukrainian refugees to enter the country via illegal means.

"People should be using the safe and legal routes if they are coming from Ukraine," he said, adding that about 95,000 visas have been issued for Ukrainian refugees since the outbreak of the war at the end of February.

More than 27,000 Ukrainian refugees have arrived in Ireland since the conflict began.