Pat Gavin of Yonkers, New York, a Mayo native, passed away on January 15. He was 84 and is survived by his wife Eileen, daughters Assumpta, Coleen and Dawn, son Tierney, 13 grandchildren, plus sisters Mary O’Malley (Roigh) and Ellie McDonnell (Erriff). 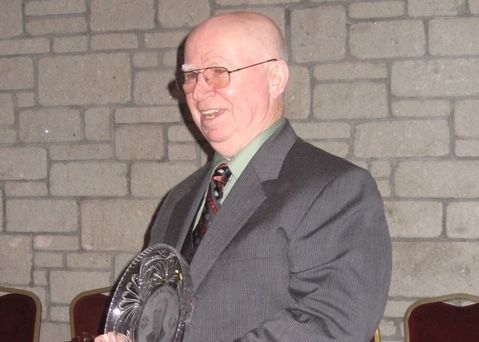 Pat Gavin of Yonkers, New York, a Mayo native, passed away on January 15. He was 84 and is survived by his wife Eileen, daughters Assumpta, Coleen and Dawn, son Tierney, 13 grandchildren, plus sisters Mary O’Malley (Roigh) and Ellie McDonnell (Erriff).

Pat grew up on a farm in the Aughagower parish outside Westport, with sheep farming being the primary activity. He took to the roads early, literally. He got a job with the Mayo County Council, equipped with a horse-drawn cart to maintain the roads around Westport.

The urge to travel soon struck and his older sister Bridie RIP sponsored him to the U.S. He arrived in Queens in 1962, and he landed his first job in Hogan’s Body Shop in Astoria.

On September 11, 1965, Pat married Eileen Tierney, a native of Lavey, Co. Cavan. In 1967, he became a bus driver and that would be his occupation for the next 30 years. The Gavins would soon move from Queens to the Bronx, and eventually settled in Yonkers.

Besides being a very family-oriented person, Pat was also a fierce GAA man.  The late Paddy Muldoon, a former chair of the Mayo County Board, described Pat “as one of the people who made the GAA great,” when he was honored in 2007 by the “Green and Red” for his great contributions to the GAA.

Father Brendan Fitzgerald, the pastor at St. Barnabas, accentuated that concept in his homily, noting that Pat’s unselfish volunteering was the bedrock of the GAA, and as such, a core concept in Christianity.

Though he was physically far removed from his native team, his interest and support continued to grow over the years. Tommy Conlon, a journalist, interviewed Pat in 2004 about his following and support of the Mayo team. Pat stated that the bus company’s policy required employees to reserve their holidays at the start of every year.

“I used to book a week’s vacation for September, just in case Mayo would be in the All-Ireland final, and so I found myself changing it every year until 1989,” he said.

Several testimonials vouching for Pat’s passion for Mayo flowed in after his death, such as from Martin Carney, a former star Donegal and Mayo footballer who said Pat was “a massive supporter of the green and red,” while John Prenty from the Connacht Council noted that “he was a true gentleman, a staunch Mayo supporter, and a great GAA man.”

For close to half a century Pat was a very prominent presence in Mayo’s Big Apple club.  He was energetic and industrious, a very able administrator from the boardroom, to the dressing room, and to the sideline. Over the course of his long career with the club he held every position, some of them multiple times, and his input was always highly valued by fellow officers and players.

Pat’s footballing passion was not just limited to Mayo as he was sure to be in Gaelic Park, Van Cortland Park or anywhere there was a Gaelic game around New York, always willing to help out. I often umpired with him in the eighties, and if the game was dull or uneventful, Pat always had a good yarn or two to tell to lessen the tedium.

Later in the nineties when I started to referee, he’d regularly step forward to man the posts, especially in Van Cortlandt Park. The hastily erected goal posts were often reminiscent of the Leaning Tower of Pisa, and Pat’s assessment whether it was a point or not, was nearly on a par with modern-day Hawkeye technology.

The eagled-eyed Mayo man was a great help to the referee as he was very quick to spot off-the-ball shenanigans, especially when play was at the other end of the field.

In 1999 I was the manager of the New York team, along with Pat Scanlan and Leslie McGettigan as selectors, when we entered the Connacht Championship with Mayo as our first opponent with the game scheduled for Castlebar.  Monty Moloney, the New York chairman, appointed Pat as the tour chairman. Well, he couldn’t have appointed a better person for the job, and I certainly got to appreciate Pat’s organizational skills and great attention to detail.

Of course, there’s nothing like supporting home industry, and Pat choose Westport as our base.  We took over one floor of Hotel Westport which included a bridal suite.  Of course we had a lothario and a Romeo or two who were jockeying for the cavorting quarters. Pat had a tough decision; can’t remember who got the hot spot.

We were probably the best dressed team in our specially tailored sartorial splendor, prompting one player to opine that he hadn’t been that well-dressed since his First Communion day.  We were also the best-fed team county for the week and the boys began to gain weight, forcing the trainer Leslie McGettigan to ask the chef in Hotel Westport to scale back the portions.

In addition, Pat ensured that we were given carte blanche to the Westport’s GAA facilities for the week we were there. Everybody seemed to know Pat and we were treated like royalty. We were given a civic reception and we were feted by the Mayo Supporters’ Club after the game.

We didn’t win the game, but we couldn’t complain about anything in the lead-up to it. The only mishap was that we picked up a few injuries against Clare the week before, and they hadn’t cleared up.

There was one funny or interesting sideshow on the morning of the game.  Mayo manager John Maughan and his team, as a psychological ploy or a blatant show of force, marched into our hotel at breakfast time. Incidentally, James Horan, Mayo’s current manager, was the architect of Mayo’s attack that day. What a surprise when they saw it was just Pat and I at the table.

Maughan came over to chat and queried where the boys were.  I told him that they hadn’t come back from early Mass yet. He was astonished that there was such religiosity in the Big Apple camp.

There was another occasion where Pat’s loyalties were on a head-on collision course. That was 1984 when a powerful New York team hammered a solid Mayo squad in the Centenary Cup in Ballina by a score of 2-9 to 0-6.

Pat was again the tour chair, the money man as credit cards were far from the norm in the Big Apple’s GAA operations at this stage. Pat would have shifted his cap quite often during this encounter with his divided loyalties!

Pat was a busy man in ’84 as he also led a New York Mayo team home to play against Claremorris, Ballyhaunis, Ballina, Castlebar, and An Garda.

In earlier years, the late ‘70s and early ‘80s, Pat was a regular selector with New York teams, and they recorded a very memorable win against Galway in the Gael Linn Cup in a two-game series in 1980.

During the 80s and 90s, Pat was very much involved at the administrative level of the New York Board.   His tenure coincided with much of the Jackie Salmon (RIP) era, and in many ways they sung from the same hymnal book. He was vice-chair for several years as well as holding positions of auditor, financial secretary, and delegate.

Over the years Pat’s schedule was fairly regular on a Sunday, namely church, Gaelic Park, and a restaurant visit.  He was rarely just an interested spectator, but always prepared to help out. He was a true GAA lifer.

Then after a busy day in Gaelic Park, he liked to cap off the day with a sumptuous meal in one of his favorite restaurants for many years, the Kozy Korner on McLean Avenue.

Pat was waked at Hodder’s on McLean Avenue and funeral mass was at St. Barnabas in Woodlawn. Very fitting symbols of Pat’s life were presented during Mass -- a Mayo jersey, a New York jersey, an O’Neill’s football, his Mayo colored cap, and family portraits.

Pat was a great family man, a staunch Mayo supporter here and in Ireland, and a powerful GAA advocate.

These have been tough times for the old GAA stalwarts. Recently we lost Jackie Salmon, this week Pat Gavin, and also Pat Diamond. For the last fifty years Diamond, a Derry man, had been closely associated with the Derry and Clare clubs as well as the Lansdowne soccer team.

May these sportsmen rest in peace.