Patrick Connolly was supposed to start work with the FDNY on September 13, 2001, but jumped into action when he saw events at the World Trade Center unfold. 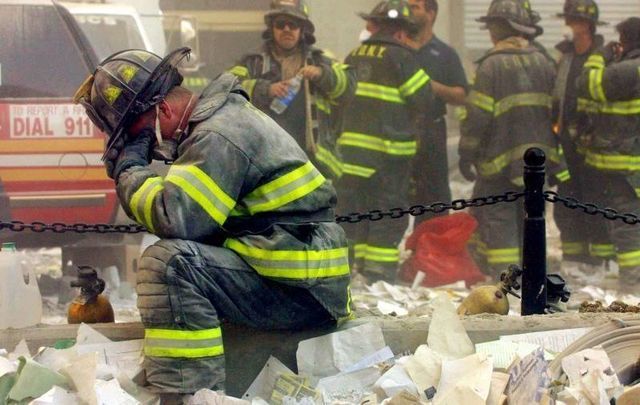 A firefighter pauses during search and rescue efforts on 9/11. Getty

A New York firefighter whose first day with the FDNY was on September 11, 2001, recalled being "buried alive" when the North Tower of the World Trade Center collapsed 20 years ago.

Patrick Connolly, now an FDNY captain with Ladder Company 133 in Queens, was initially supposed to start work with the fire department on September 13, 2001, but jumped into action when he saw events at the World Trade Center unfold while he was on a run.

"I knew it was a bad bad day about to happen, never knowing at all the magnitude of it, and what I did then, I just ran home," Connolly recently told NY1.

"This is a picture of my brother Brian and myself, obviously quite emotional,” Connolly said. “My first day. We never thought — the building came down pretty much around us. He was only about four to five feet from me, but we were both buried alive.” https://t.co/EFnu4U0gZi

The rookie firefighter took both sets of brand new firefighting equipment from the trunk of his car and ran to his older brother Brian, who was a firefighter in the Bronx.

Connolly said that both he and his brother suited up and made for the World Trade Center and recalled their attempts to flag down a speeding firetruck.

"We were chasing a firetruck. I will never forget that. We were trying to get them to stop and they wouldn't stop. We were waving our helmets out the window," he told NY1.

Connolly was so new to the job that he did not yet have identification for his equipment and so he scribbled his name on duct tape and taped it to his new helmet.

However, as Connolly and his brother approached the North Tower, the building collapsed, leaving them buried alive under the debris.

"The building came down pretty much around us, he was only about four to five feet from me, but we were both buried alive. It was crazy."

Connolly said that every firefighter had a story to tell from 9/11 and added that it was more important to "remember those we lost".

He has started a tradition at Ladder Company 133 that honors one of the 343 FDNY members who died on 9/11 at the end of roll call each shift at the station in Queens.

Connolly explained the tradition to NY1.

"What it reads is ‘Today's roll call is dedicated to the loving memory of Firefighter Durrell ‘Bronko’ Pearsall Rescue 4, lost on 9/11/01 at the World Trader Center, rest in peace and never forget."