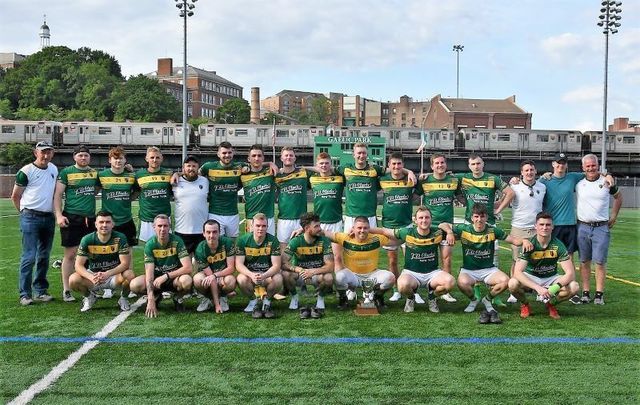 Both sides opened with goals in this senior league final goal-fest. Shane Gillespie goaled for Brooklyn with Niall Madine as the supplier, while Tiernan Mathers did likewise with Mikey Brosnan as provider.

David Culhane landed a fine effort, while Conor Hogan executed a critical block on a goal-bound effort from Gillespie.

Barnabas had the better of the first quarter as Dylan McDermott landed three spectacular points with assists from Dylan Curran, Stephen Monaghan, and Shane Hogan. The tenacious Paddy Boyle forced a turnover to score a point before the first water break.

After badly needed hydration, with temperatures in the 90s, Madine and Gillespie added quick points while Sean Reilly entered the fray and punched a point.

Brooklyn edged ahead with frees from keeper Cunningham and Madine. Then just before the short whistle, Mathers banged in two goals, though a defender claimed he was tripped leading up to one of them. From my vantage point, he stumbled from incidental contact.

Upon resumption, the Barnabas lead increased to six with a Brosnan point. Then over the next five minutes, Brooklyn produced their most explosive spell to nail 3-1 and go four points up. Gillespie hit two with assists from Paul Malone, while Culhane went straight through the middle for third.

A Kevin Rafferty point and another Mathers goal stalled Brooklyn’s scoring spree, but with pointed Madine frees they led by 4-8 to 4-7 entering the last quarter.

Andrew McGowan added to the lead with a point and Culhane looked poised to rattle the net, but keeper Cole courageously thwarted his effort. Points from Brosnan and Kennedy had the sides level with four minutes, but Madine added a point.

The remaining few minutes were decisive as Barnabas put three consecutive points on the board courtesy of Monaghan, Conor Mathers, and Brosnan with assists from Shane Hogan.

Brooklyn had appeals for a penalty with two minutes left but had to settle for a Madine point.  Shane Rafferty brought the curtain down on a great game with a fisted point. The American boys are certainly a powerful force and I’m sure we’ll see plenty more of Brooklyn as they are the real deal as a senior team.

Referee Pat Donoghue was the consummate professional and kept his cool and composure as others were blowing their stacks.

Westmeath Too Good for Leitrim

Undefeated Westmeath were firm favorites to pick up the intermediate league laurels as they had already vanquished Leitrim in the earlier rounds. That seemed to be fairly reliable as the Lakesiders were well stocked, while Leitrim struggled to get the requisite number of players on the field.

Ciaran Brennan pointed from Westmeath’s first possession while Leitrim lost their industrious midfielder John Conefrey in the early exchanges. Mike Creegan made a welcome return to Gaelic Park as he set up Stephen Harten for Leitrim’s opening score.

Then it was back to Westmeath’s script as they put six unanswered points on the board. Dylan McDermott (two), Dalton McDonagh (two), Phelim Finnegan, and Kieran O’Mahoney all hit the target with valuable assists from Jack Martin.

Leitrim interrupted Westmeath’s scoring spree as Andrew Bourke pointed for a foul on Fergal Ellis and Sean Kelly landed another. Kelly was also instrumental in the next score as he lofted a high ball into the goalmouth which the Lakesiders spilled, thus setting the scene for Donal Casey to bang it home.

Now the deficit was just a point approaching the water break, but it didn’t last long as O’Mahoney rattled the net at the other end to capitalize on a defense-splitting run by Brennan.

After hydration, Leitrim enjoyed a brief purple patch as Ellis pointed after a nifty pass from Creegan, and Enda Fowley travelled deep from defense to set up Kelly for a score. Kelly added another after Casey was fouled.

Westmeath summarily assumed control as they answered Leitrim’s three points with 1-4. McDermott belted over two superb points and Finnegan tapped over a free before Jason Kelly came straight off the bench to sail over a “45.”

Then a defensive lapse left Leitrim exposed at the back, and McDermott powerfully blasted the ball to the net to leave his team leading by 2-11 to 1-7 at the short whistle.

In the third quarter, events seemed to be going Westmeath’s way as they had a very impressive 3-15, a goal from Sean Moore, and points from Kelly, O’Mahoney, Finnegan, and Dalton to Leitrim’s 1-9 at the last water break.

The last quarter certainly was very different. Leitrim went on a serious scoring blitz, hitting 1-6 while limiting Westmeath to 0-3 to bring themselves right back into contention.

Ellis banged in a goal, Cormac Maguire had a point while Kelly nearly had a half dozen with assists from Liam Maguire, Creegan and Casey.

Was this a powerful Leitrim revival or the multiple substitutions destabilizing Westmeath’s game plan?  The reality was that had another goal-bound Leitrim attempt not being scrambled off the goal line the deficit would have been down to the minimum.

There were a few panic bells on the sideline and a few starters returned to the fray.  However, late points from Moore and Man of the March McDermott restored composure and preempted any chance of a late goal surprise. Keeping the subs happy sometimes can be a double-edged sword!

*This report first appeared in the May 26 edition of the Irish Voice newspaper, sister publication to IrishCentral.