The NY Junior Side bested the NY College Side 1-6 to 0-7 on a particularly cold Saturday evening in Gaelic Park in the Bronx. 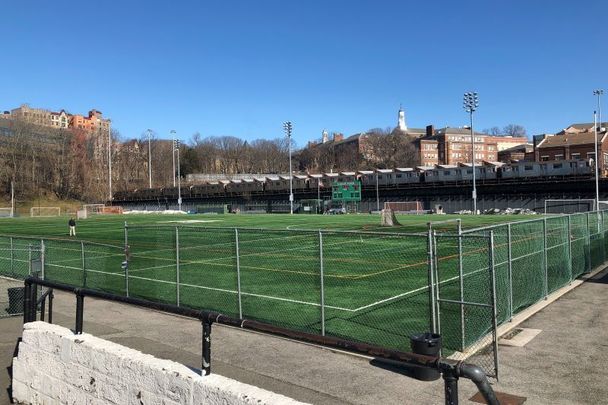 More than 40 American-born GAA players and staff lined out in Gaelic Park in the Bronx on February 5.

On a night that was freezing cold, the brave of the bravest took to the field a Gaelic Park last Saturday evening for an intense Gaelic football challenge match between the New York junior side and New York college side.

The college side will travel to Ireland in just over a week's time for a tournament where they will be based out of Wexford. You must be in college to be eligible.

The New York junior side has a tournament later in the year when they will travel to Carlow. You must have come through the New York Minor Board system to be eligible.

Both sides have been training in these winter months as they prepare, some of them joining the New York senior side in its preparations for county side Sligo who arrives in New York for the Connaught Championship on April 17.

It was cold, to say the very least, and hopefully hot showers will be available after round two next week when these sides do battle again, but that didn’t bother the over 40 strong American-born players on hand and their coaching teams.

When all was said and done, the New York junior side squeaked out the narrowest of victories, but they must thank their superb goalkeeper Brendan Cole who was unbelievable on Saturday evening. Superb save after saves, at least five at point-blank, were the major difference.

Finding the goalposts was also difficult for the college players, and they will rue the 11 wides they had over the hour and five long-range efforts that dropped into Cole’s waiting arms.

That's not to say that they dominated completely as the juniors pulled out the win, which says a lot for their defiant defending and high percentage shooting in what was a very interesting encounter.

The game had a novel approach in that it was played in four 15-minute quarters with the ball thrown in as each one began. This gave coaches McGeeney and Curtis opportunity to pull their charges together and discuss tactics, directions, and reactions needed in a month when games are hard to come by.

The college side won the opening segment, 0-4 to 0-2, with Shay McElligott tapping over all four scores, three from frees.

Both sides will rue golden goal-scoring chances in the opening moments, however, with the junior opportunity ending in a low driven wide after a long run by Sean Moore, whereas the college side just took too much out of the ball and their chance went a begging with the defense nipping in.

Senan Price was fouled for one of the frees when he was thinking far more, while Caolain Mathers was also fouled while thinking top shelf.  Astute defending giving away the small score in lieu of the larger by a defense that was being well marshaled by Conor Hogan, who played a pivotal part over the hour with his positive outlet passes reaching teammates continually.

The college side extended their lead as the second quarter opened. The inside forward was held off the ball and McElligott had his fifth tally, but after a brief period of non-dominance by anyone the biggest break of the contest arrived, and it came at the junior side’s offensive end. They won a free on the press box sideline, approximately 35 yards out from the end line.

Tiernan Mathers grabbed the ball and stepped up with thoughts of splitting the posts. His long ball dropped literally a foot short, however, with Ryan Corrigan grabbing it under the crossbar.

With all the defensive and offensive activity in the small box, Corrigan ended up in his own net, and the sides were level. After a long discussion between ref Pat Donoghue and the umpire, the goal stood.

The college side nudged in front again with another McElligott effort, a beauty this time from play, but Mickey Brosnan replied with the tying score. We had an extended period where the ball was battled for between the 21s, sometimes the final pass dropped short, or was timely intercepted. It can easily be put down to the temps, however, for both sides, as well as the early season cobwebs being blown away on the freezing evening.

The final chance of the half fell again to the juniors, but on this occasion, Corrigan did superbly when he pulled the long delivery from the skies and cleared superbly.

All level at the break then, 1-3 to 0-6, for a short sermon from management teams who were pushing for the early season victory.

Three wides in the early minutes of the second half spoke ominously for the college team. They would rue those chances later. Brosnan pushed his side in front once more but he also received a yellow for a very high tackle as he stopped a defender as he stormed out from the defensive end.

McElligott left the field, precautionary, with an injury moments later and it would have a telling effect on his team’s endeavors. His side had two further wides, one from a free, and despite superb play from Peter Cronin who was joining the attack continually they could not move the scoreboard at all.

It was significant that the junior side was stacking their defense, with 13 and 14 bodies back in their own half repeatedly. The college side found it increasingly difficult to break this green barrier down, and when they did Cole was superlative in the last line. He made three excellent saves on the bounce, and this kept his side in front, granted just barely.

Shane Brosnan did fire over a long-range effort to tie the game for the fourth time but with the third quarter complete, it was telling that the college team had added just that solitary point to their total.

Shane’s brother Mickey, on the other side, pushed his team ahead for the most important final time with an excellent team score to open the final quarter. He started the move by showing for the ball early, then he finished it at the end of the passing move that involved three other players. They followed with a long-range free that dropped short, as they had a good offensive period, which also helped time tick down while they were ahead.

The final pass was hurting the college side again, and Cole had another excellent save from an advancing Price to keep his side ahead.

Mickey Brosnan finished his evening with a black card to drop his side to 14 players, but they dominated the closing period despite the numerical disadvantage and even increased their lead with a Jamie Boyle score which meant that the college side now needed a goal to have any hope of rescuing the fixture.

Not happening with Cole in flying form, and two further wides summed up the evening for Paddy Curtis’ side.

For the winners, Brendan Cole was outstanding. He had to vary his kick-outs due to college pressure, but his saves kept his side in the contest and won it for them. Jamie Boyle, the excellent Conor Hogan, and the Raffertys made it difficult all evening, while upfront Mickey Brosnan, Tiernan Mathers, who was a real handful when he went into the top of the square, and Conor Mathers all had good moments.

For the college side, there’s plenty to work on, but the talent is there. Seven scores, but an additional 11 wides and eight balls saved or caught by Cole, equals 25 or so chances.

If they can get the execution up to 50 percent and grab a goal in the mix, that will give you a chance in any football contest. They did rotate all the panel which takes away from fluidity, but you do need to see players on the field.

Peter Cronin, Colm Shalvey, and Eoin Moriarty all had quality moments at that back when they were on the field. Kennedy and Mathers shaded the midfield exchanges, while Shay McElligott was excellent until he retired. Senan Price and Shane Brosnan also had a positive impact on the encounter.

Next week’s game two promises to be another competitive tie. Tickets are available.

*This report first appeared in the February 9 edition of the weekly Irish Voice newspaper, sister publication to IrishCentral.