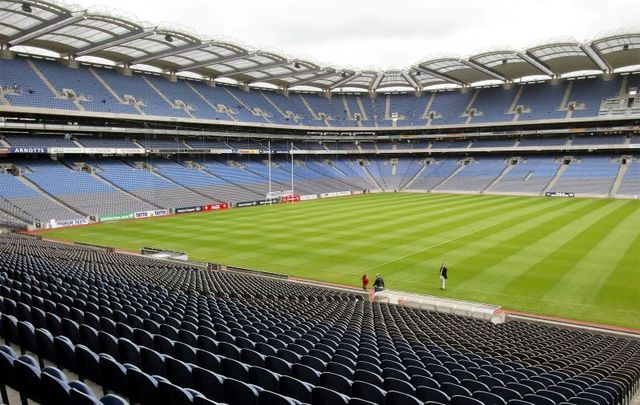 Kerry hit Dublin where it hurts once again in Tralee on Saturday night with their 1-15 to 0-11 Allianz National Football League Division 1 win just adding to the doubts about the ability of Dessie Farrell’s side to hit the heights again anytime soon.

A second successive league defeat was bad enough for the Dublin fans who made a weekend of it in the Kingdom despite the atrocious weather, but the words of Farrell afterwards will have done little to lift their spirits.

Still coming to terms with a raft of winter retirements, this is a Dublin side struggling with transition, their plight on Saturday not helped by the last-minute withdrawals through injury of James McCarthy and Con O’Callaghan while a sin-binning for Niall Scully, probably in a case of mistaken identity, didn’t do much for them either.

With Kerry playing with the wind at their backs and Scully off the pitch, the home team hit 1-8 without reply in the latter stages of the opening half to lead by 13 points at the break. They only scored one point after the turn-around but that was enough to win by seven points.

Speaking to RTE Sport, Farrell said, “It was a tough night.  It was always going to be the case coming to Tralee. Even with the strongest of Dublin teams over the years, it’s a cauldron down here.

“Obviously we were down a few bodies, a lot of newbies in tonight. It was a great experience for them to play Kerry in Tralee, but the game got away from us in the second period of the first half. We struggled to manage that in the way we would have wanted.”

Kerry were more impressive in the first half of Saturday’s game than they had been in the draw with Kildare a week earlier. “We needed a reaction from last week,” said manager Jack O’Connor.

“We were adamant we would go after the game from the start, to try and play more positive football. In the second half in Newbridge we tried to hold on to the lead, and you can’t do that in Gaelic football. In general we’re happy enough, but well aware that come the summer Dublin will be a different outfit when they get those men back.”

All-Ireland champions Tyrone had their own issues with refereeing decisions in their 2-14 to 0-14 defeat to the ever-improving Armagh at the Athletic Grounds on Sunday when referee David Gough sent off their captain Padraig Hampsey, Peter Harte, Kieran McGeary and Michael McKernan and Armagh’s Greg McCabe after a late melee.

Tyrone are to appeal against the four dismissals and joint manager Feargal Logan admitted, “I think it was a lot of jostling and stuff, I’m not so sure whether there were any blows struck or striking action. But in fairness it’s not easy to deal with for referees, umpires, linesmen.

“We will have to study the video and look at it all. How balanced or imbalanced the position is now, we don’t know. Both teams were involved in the schemozzle. We’re not proud of it but we’ll have to study it and whatever way it comes through we’ll have to deal with it. That’s life and that’s football.”

Mayo, 2-10 to 1-11 winners against hosts Monaghan in Clones, lost Eoghan McLaughlin to a foot injury during the game on Sunday just days after a cruciate knee injury ruled Tommy Conroy out for the rest of the season. Donegal also picked up new injury worries when Michael Murphy and Jason McGee were forced off during their 2-11 to 1-9 win over Kildare in Ballybofey.

It's a funny old game this hurling.  All-Ireland champions Limerick were a shadow of last season’s all-conquering side and Wexford were a shadow of the team beaten by Dublin in the Walsh Cup final a week earlier as the Allianz NHL Division 1 Group A season opened in Wexford Park on Sunday with a 1-11 to 0-11 win for the home side.

New Wexford manager Darragh Egan, who hopes to have injured captain Lee Chin back by the end of the season, was delighted with his team’s quick turnaround in form and fortune after that Dublin defeat.

“Our intensity was at shocking levels last week against Dublin, we needed to build on that today, which we did,” said Egan after the win. “We made it a battle but there are going to be times when making it a battle isn’t going to be enough. We are going to have to hurl on top of that.

“Limerick are probably only getting their year started at present. All the rest of us are on catch-up at the moment and, again, we have a group of lads in there that are starting into a project.”

Limerick, who lost their opening three league games last season, hit too many wides for comfort and manager John Kiely admitted, “We didn’t get enough of our flow going. We didn’t get enough passing movements going and that continuity piece from the middle third into the final third, the ball broke down on too many occasions in that sector.”

Clare lost Colm Galvin during the week when he was forced to retire from inter-county hurling with a long term groin injury and they also lost their opening league game, going down by 2-30 to 2-21 against Cork at Pairc Ui Chaoimh.

“I’d love to have continued playing for Clare but after ongoing conversations with Brian Lohan, realistically my body just isn’t able for the workload required at the highest level any longer,” said Galvin.

“Central to this is a persistent groin injury that has never healed properly, which has proven extremely frustrating as well as mentally draining.”

Galway enjoyed their first NHL win under new boss Henry Shefflin in an easy 4-22 to 0-17 victory over Offaly at Pearse Stadium.

Kilkenny boss Brian Cody started another National Hurling League campaign with a win, but the veteran wasn’t too happy with his side after they defeated Antrim by just three points – 2-15 to 3-9 – at Nowlan Park in Division One Group B.

“We were very, very average overall. We were never really comfortable in the game. Antrim got an early goal. We took a long time to get back into the game. We kept going and we definitely improved in the second half,” said Cody afterwards.

“For the first half of the second half we were good. After that Antrim came back into it again. We won the game. That is the most important thing.”

Antrim referee Colm Cunning flashed 18 cards in total, including two reds and two blacks, at Parnell Park as Dublin and Waterford drew, 0-21 to 2-15.

“I was very surprised by the number of cards,” said Waterford boss Liam Cahill. “It’s February hurling and the league is going to be more condensed this year, more than ever with the short run into the championship.

Tipperary recovered from the shock of Padraic Maher’s retirement during the week to defeat Laois by 0-21 to 1-14 at O’Moore Park, with Maher taking on a new role of supporter after doctors advised him to quit due to a neck injury or risk serious damage.

An All-Ireland winner on three occasions and a six time all-star, Maher had felt unwell recently and was shocked at the diagnosis delivered by his doctors. “We got to the root of it recently and thankfully we did because if the doc didn’t send me for a scan I could be in training and could have been making it a lot worse unbeknownst to myself,” he said.

Meath manager Andy McEntee and his nephew James both saw red as the Royals went down again in Division 2 of the NFL, Roscommon leaving Navan with a 1-15 to 1-11 win on Sunday thanks in no small part to a seven-point return from fit-again Conor Cox and a goal from Conor Heneghan.

A late scrap between several players, prompted by a James McEntee challenge on Ultan Harney, was followed by a straight red card for the Meath manager and his defender.

As for the result and a second straight league defeat, McEntee added, “Nobody likes losing, they’re all very dedicated to this and nobody likes losing so of course they’re low in the dressing room but we have another five games to go.”

Westmeath fans can sense a revival of sorts from their football team as their impressive early-season form continued with a 2-11 to 0-11 win over Laois in their NFL Division 3 clash at O’Moore Park.

*This roundup first appeared in the February 9 edition of the weekly Irish Voice newspaper, sister publication to IrishCentral.