Áine Lynch, a 35-year-old mother-of-two from County Armagh, shared images of the burns she sustained while trying to cook poached eggs in the microwave. 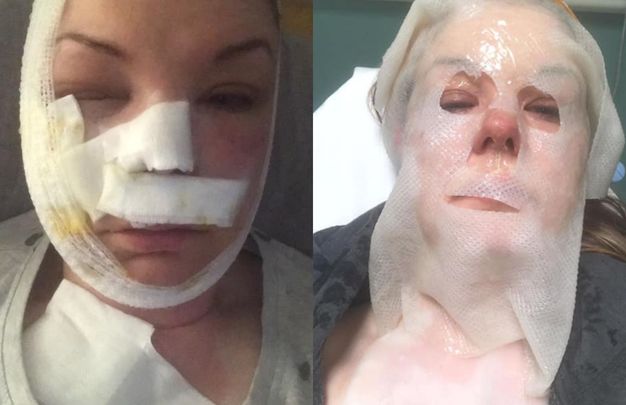 Áine Lynch took to Facebook to warn people of the dangers of cooking poached eggs in the microwave. Áine Lynch Facebook

A Northern Irish woman took to Facebook to warn people of the dangers of cooking poached eggs in the microwave after she suffered painful burns while trying to emulate a cooking hack seen on a British talk show.

Áine Lynch, a 35-year-old mother-of-two from County Armagh, shared images of the burns she sustained while following advice from a panelist on ITV's daily talk show "Loose Women".

Frankie Bridge, a former member of the popular British girl band The Saturdays, demonstrated how to cook poached eggs in the microwave by cracking an egg into a cup partly filled with water on the talk show, demonstrating the "perfect" poached eggs just one minute later.

Lynch attempted the hack herself and placed a cup in the microwave at about 10:30 am on a Saturday after looking after her kids all morning. However, the eggs were overdone when she removed them from the microwave after 60 seconds, so she tried again with another cup, this time placing them inside for just 50 seconds.

"Once it was done, I lifted the mug out of the microwave and within seconds the egg exploded and sprayed the boiling water all over my chest, neck, and face," she told BelfastLive.

Well yesterday’s lesson was not poach eggs in the microwave! I saw a hack on loose women and it’s fair to say it was an...

She said that she started screaming for her husband Johnny, who ran into the kitchen and covered the burns in cold water before taking her to her local pharmacist to get cream and a burns pad.

The pharmacist advised her to go to A&E and Lynch said that she was fortunate that she lived just 10 minutes from the hospital as the pain was "excruciating".

After five hours in the emergency room, Lynch was sent home with "a bag of pain relief, lotions, and dressings".

She said she was lucky that she wasn't holding either of her two young children at the time of the accident.

"All that kept going through my head was thank god I didn’t have one of the kids in my arms, especially my youngest as I'm usually holding her."

She hopes to spread awareness about the dangers of trying hacks like the one she saw on "Loose Women" and urged people to be "careful" in a post on Facebook that has been shared more than 700 times.

Lynch expects to make a full recovery from the burns and hopes that there won't be any scarring, although she is currently on a heavy dose of painkillers and sleeping tablets to help her deal with the pain.

"Thankfully Johnny's work is very understanding and have given him the week off to look after the kids because the painkillers are so strong they leave me a bit drowsy, so it’s not safe to be alone with them," she told BelfastLive.

"I’m finding it hard to sleep, so I’m now taking sleeping tablets. My emotions are really erratic now too."