Victoria Lily Tully claims ghosts in Co Donegal's Sharon Rectory, where she and her family live, have caused mysterious markings on her arms. 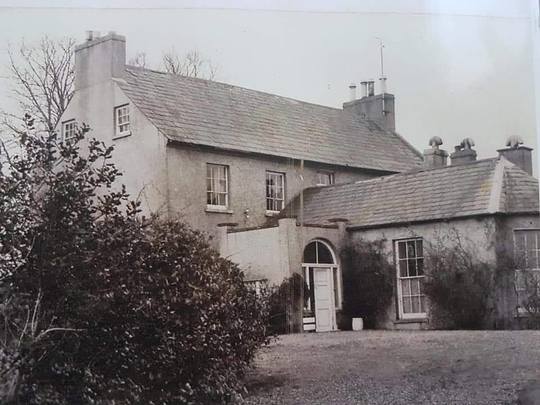 A beauty queen has shared details of injuries she claims were caused by ghosts while growing up in one of Ireland's most haunted houses.

Victoria Lily Tully lives with her family in Sharon Rectory in Co Donegal, which was the site of a gruesome murder centuries ago and has now become a hotspot for paranormal enthusiasts.

Victoria, who is a student and recently won Miss Bikini Universe Ireland 2021, has grown up in the house and says she has been left with scratches, bruises, and even burns, pictures of which were recently shared on Facebook:

Following on from my previous post about my kids seeing a mysterious “statute” on the balcony, a few days prior to this...

The March 3 Facebook post said in part: "One evening, while she [Victoria] was upstairs in the master ensuite, she felt a sharp pain on her left wrist for no apparent reason.

"When she checked under the light, she noticed a strange symbol on the inside of her wrist. She watched as it got redder and brighter. She knew she hadn’t done anything to cause such a strange mark, which freaked her out.

"Meanwhile, I was in the gatehouse when I got a notification on my phone that the motion detection was set off on one of the indoor security cameras. I didn’t notice it until I received a message from Victoria and Mum saying that Victoria got a spiritual attack. When I checked what was on the camera, I noticed a bright light anomaly appearing from the ceiling and shooting down past the camera. This anomaly co-sides with the time that Victoria received the attack. Also, it looked to be coming from the direction of the master ensuite upstairs.

"When Victoria sent me the pictures, I was shocked at the weird shape that appeared. We think it looks a bit like an inverted pentagram which isn’t good. It’s almost like she was branded by the negative entity that lurks in Sharon."

Speaking about living in the Irish haunted mansion, Victoria says: "As soon as I was able to walk and talk, I had an imaginary friend but it turned out to be the spirit of the house and I still see her today; she wears a white gown and has long hair.

"My bedroom is behind the back staircase and I would constantly hear someone walking up the back stairs - they always get you when you're at your most vulnerable so it's normally when we're sleeping.

"The attacks happen at night; one time I was in the shower and scratches appeared on my body out of nowhere.

"Up until a couple of years ago, I was really scared in the house and refused to walk around by myself but this is my home and it's supposed to be my safe place so I learned to accept it."

First built in 1775, the more than 20-room Sharon Rectory was the site of a gruesome double-murder in 1797 when the Reverand William Hamilton and his wife Sara Waller were murdered by the United Irishmen on the eve of the 1798 Rebellion.

Sharon Rectory is now said to be haunted by lost souls and spirits that give the house a demonic presence.

The ancient mansion fell into disrepair following years of disuse but was bought by Vincent and Lisa Tully in the 1990s. The couple renovated the dilapidated property and moved in with their two daughters Emma Louise and Victoria.

Victoria’s sister Emma Louise released a book in 2020 about the ghost encounters she and her family have experienced called "The Haunting of Sharon Rectory: Our Truth, Our Horror And Heartbreak."