Barney Corrigan's selfless act of kindness has helped feed hundreds of struggling families during the pandemic. 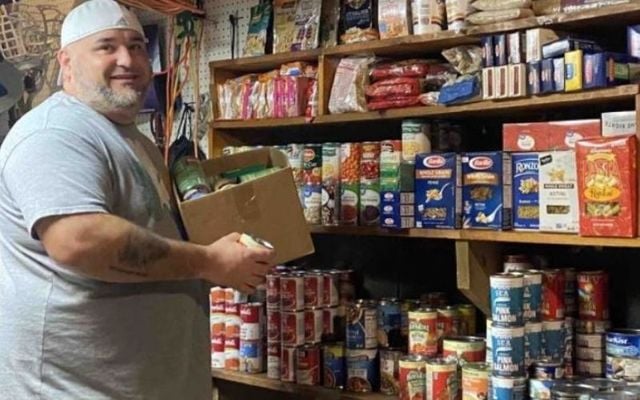 An Irish American man living in New Jersey has turned his garage into a food bank to help people in need during the COVID-19 pandemic.

Barney Corrigan, a 42-year-old caterer in the foodservice industry who lost his job when the pandemic hit, built a small food pantry in his garage last April to help people who were struggling financially.

The Waterville resident began by building a small wooden cabinet and placing it on his front lawn, filling it with dozens of non-perishable food items.

"I was just watching the news and saw how many people were losing their jobs," Corrigan told nj.com. "So I decided to just build a little pantry and put it out front of the house and I went and stocked it.

"I figured it was the least I could do."

His brother Drew posted an appeal on Reddit and word quickly spread about Corrigan's impromptu food bank, which has been dubbed "Barney's Place".

The Irish-American was soon inundated with donations of non-perishable foods and has also set up a Venmo account and a CashApp to accept cash donations.

Before long, his homemade wooden cabinet wasn't big enough to hold all donations and Corrigan left a bin on his front porch where people could leave food. He told NJ.com that he would often come home to find it overflowing with bags of non-perishable food.

"I started getting diapers and baby food and it was getting crazy. But, a good crazy," he said.

Corrigan now stacks his food donations on shelves in his garage and allows people in need to visit every Saturday.

"It makes my week every time," he said.

Corrigan has naturally been subjected to widespread praise and adulation for his efforts, but he modestly shrugged it off in an interview with 6ABC.

"I don't think anyone should have to worry about where their next meal is coming from," he told 6ABC.

"It's a necessity, man, people have to eat, y' know," he continued.

Corrigan credits his wife Bernadette with getting the food pantry off the ground, explaining that her job with Union Bank in New York enabled him to set the food bank up without worrying too much about finances.

His noble work has reached national attention and he appeared on the Drew Barrymore Show last September, where he was presented with a $10,000 check by Conagra Brands food in recognition of his efforts.

"We want to shine a light on people doing extraordinary things and for everyone to know that there is goodness happening in the world, that humans are having each other’s back," Barrymore said while awarding the check to Corrigan.

You can donate to Barney Corrigan's GoFundMe here.