Seamus Dooley, a beloved New York GAA stalwart whose love of his native games knew no bounds, has passed. 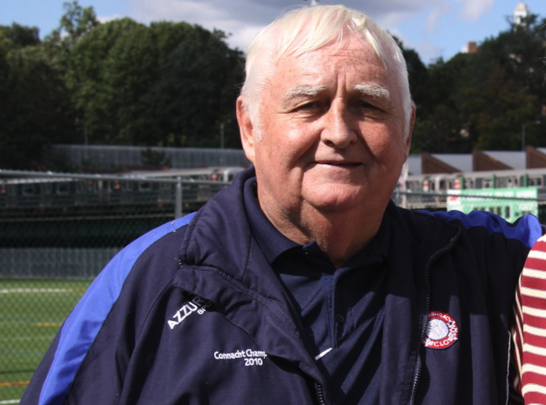 A fixture at Gaelic Park for decades, family and friends fondly remember the one and only Mr. GAA, Seamus Dooley.

“It is impossible to sum up my dad.  He loved too big and touched so many,” Amanda Dooley Atkinson, the only child of the late Seamus Dooley, told the Irish Voice.

The death of Seamus Dooley on Friday, November 13, at the age of 74 has been a tough one to take for the New York GAA, which Dooley served so proudly, and in so many capacities, for decades.  As Frank Brady says in an accompanying tribute, Gaelic Park simply won’t be the same without the always jolly Seamus, who never stopped talking about the GAA or his Amanda, who he raised as a single dad after the untimely death of his wife Ginny in 1994 when she was only 39.

Father and daughter were two peas in a pod. “He made me the center of his world, ensuring that I lived a life of love and happiness,” Amanda said.

“It is truly beyond incredible to see the impact he had on his world. He was a legend and a gentleman.”

“To call him Mr. GAA is unfair, he was much more than that. He was a player, a referee, a delegate, an officer. He was in charge of the pitch, he was in charge of the refreshments. He was the liaison with Manhattan College where he had the ear of all the coaches all the way to the president's office,” the statement said in part.

“He was the chairperson of the New York GAA when the field was developed. He was our Central Council delegate who had a wonderful relationship with Croke Park. Most of all, he was our friend.

“Today, it seems appropriate that it is a dull grey day. When Seamus was around the world was a brighter better place and it was always great to see him come into wherever you were, often with the Irish newspapers under his arm and a smile and a word for everyone in the room, looking to take part in a game of cards or argue a square ball against Monaghan from 1979.  We will miss him deeply and he will be in our hearts forever.”

Terry Connaughton, another legendary New York GAA figure and owner of the Riverdale Steakhouse, knew Dooley well.  “We worked together in the GAA for 40 years,” Connaughton told the Irish Voice.

“He was a great friend, always obliging. He would do anything for you. He was some storyteller, though you’d have to figure out which ones were true and which ones he was exaggerating!  We will miss him for sure.”

The New York Ladies GAA was also on the receiving end of Dooley’s undying support.  The association said in a statement, “Walking in the gates of Gaelic Park you were always greeted with a warm hello, a small amount of Dooley’s version of ‘fake news’ pertaining to who might be making their appearance in the park later that day. He enjoyed the fun with all our players and his hearty laughter will truly be missed in Gaelic Park in the years to come.

“Seamus was an extremely generous soul and was always willing to help anyone looking for work or places to stay. He never refused a ticket or a request for support. He was our guest of honor in 2009 but no awards would ever be enough to recognize the Trojan work Seamus did for our organization.”

Dooley was also warmly remembered by the Monaghan GAA both in Ireland and New York and with a touching Facebook post from the Carrickmacross Emmets team in Monaghan.

“Some years ago I had the pleasure of Seamus Dooley’s company on a trip home from the GAA Congress in Killarney, and the accolade from his colleagues in New York sums up his personality to perfection. The long journey home from Kerry was made a lot shorter as Seamus was the best traveling companion you could have; conversation and craic all the way and the travel time seemed to vanish in half as we headed up the road,” the author wrote.

“We thank him for all his help with so many former Emmet players that he took under his wing and looked after their interests like if they were his own family. Seamus will be truly missed within the Monaghan GAA family and our association.”

On Sunday evening, a minute of silence was observed in Dooley’s honor at the outset of the under-16 New York Minor Board final at Gaelic Park, with the scoreboard lit up with his name.