The rally took place three days after dozens of people staged a protest outside an accommodation center in the Cork town of Fermoy following the arrival of 66 international protection (IP) applicants. 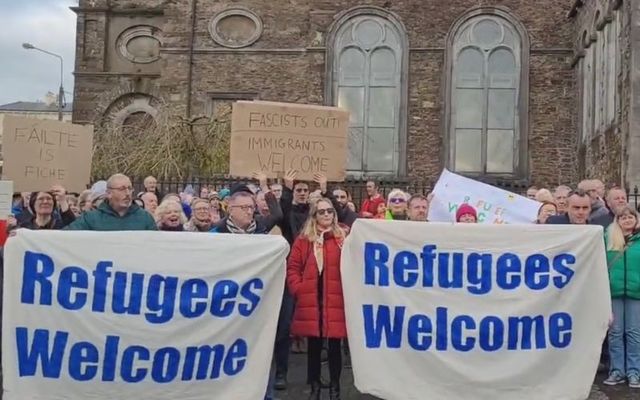 Approximately 300 people gathered in Fermoy in County Cork on Saturday to show solidarity with refugees and asylum seekers.

The rally took place three days after dozens of people staged a protest outside an accommodation center in the Cork town following the arrival of 66 international protection (IP) applicants.

Local musicians also performed at the rally, singing the refrain "everyone deserves a home".

Kate O'Connell, who helped organize the rally, welcomed refugees and asylum seekers to Fermoy, adding that "hate mongers" do not bring solutions to communities.

"If you live here, you belong here. Fermoy is your home," O'Connell.

The message at a solidarity rally in Fermoy, Co Cork today pic.twitter.com/8aN8mqzwBB

Several people who attended the rally told the Irish Times that they were horrified by the anti-refugee protest that took place outside St Joseph’s Convent in Fermoy last Wednesday following the arrival of 66 IP applicants, including 19 families, 25 children, and eight single women.

Maggie Blackley, who lives outside Fermoy and attended Saturday's rally, told the publication that she did not want to convey a false message that the "town is closed to refugees and asylum seekers".

"The people of Fermoy didn’t like that message and we knew that the people who brought the message to Fermoy were not from here. All we had was 36 hours to figure out how to say, ‘that isn’t Fermoy, Fermoy is welcoming’," Blackley told the Irish Times.

"We decided to stand here holding banners to say that ‘that isn’t us. This is us.’ We want our society to be open and welcome and charitable."

She said Wednesday's anti-refugee protest was not representative of the Fermoy community and said people from outside the community had traveled to Fermoy to take part in it.

Blackley urged other communities that are "hijacked" by similar protests to hold counter rallies and show their support for refugees and asylum seekers.

Blackley has four Ukrainian nationals staying in her home and described it as a "gift" that has broadened her world.

"We have two of the nicest 35-year-old mothers, who are best friends and they each have a little boy. The little boys are seven and five. We couldn’t have nicer people in our home. We will be the great beneficiaries of the time we have spent together," Blackley told the Irish Times.

"It broadens your world. It is heart-warming."

A small number of people who attended Wednesday's anti-refugee protest showed up on Saturday and attempted to engage with those showing solidarity with refugees and asylum seekers.

A number of gardaí were in attendance during Saturday's rally, which passed without incident.