For five decades Leeds Irish Centre, in England, has been the first port of call for countless emigrant Irish people who have sought work and prosperity after leaving their homeland. 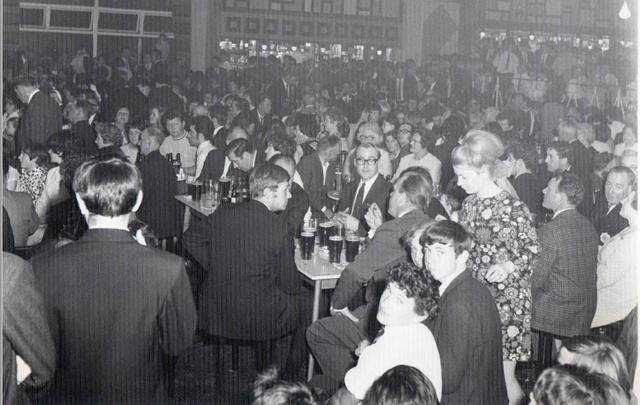 For five decades Leeds Irish Centre, in England, has been the first port of call for countless emigrant Irish people who have sought work and prosperity after leaving their homeland.

Leeds Irish Centre is now firmly entrenched in the city’s history and culture, having always opened its doors, heart and arms for people of all religions and backgrounds.

Now, 2020 sees the centre celebrate its 50th anniversary and it wants people from across the globe with links and happy memories of it to get in touch.

Tommy McLoughlin has managed the York Road venue for 45 of its 50 years and was master of ceremonies on its official opening night in June 1970. For many, he is the face of the Irish community in the West Yorkshire city.

He says the anniversary is an opportunity to show how the Irish have shaped the city and region over the past 200 years and how the centre has nurtured people’s heritage while they forge new lives in an unfamiliar land.

It is estimated that as many as six million people living in the UK have at least one Irish grandparent (around 10% of the UK population) and according to the 2011 Census, nearly 20,000 people living in Yorkshire and Humberside were born in Ireland. The area has a high concentration of people from Mayo and the west of Ireland.

"For 50 years we have quietly gone about our business, looking after our own. But the committee and I believe now is the right time to reflect on how we and our ancestors have contributed to the city’s culture, commerce and history.

"Our charity work alone is staggering - raising hundreds of thousands of pounds over the decades for local organizations. We have brought entertainers from Oasis to Val Doonican to the venue.

"Stars from the sporting world love to visit us. We’ve had bishops, presidents and ambassadors - and all get treated with the same warm welcome as our members," says Tommy.

"Oasis came in 1984 and one of them popped into my office to ask to use the phone. He wanted to ring his mum and said she was only in Manchester. They were lovely lads!"

The centre opened its doors in January 1970 but it was not officially declared open until June that year when the Bishop of Leeds officiated at a ceremony at the three-acre York Road venue.

An array of musical, sporting, cultural events is lined up over the golden year. There cannot be many places celebrating 50 years in operation that can bring back the star of the original opening night.

Brendan Shine was a 23-year-old singer on the rise when he and his show band took to the stage on the centre’s opening night in 1970.

Five decades on, the now veteran performer he will return to perform in June alongside another Irish showbiz legend, Philomena Begley.

"That will be a highlight of 10 days of celebrations," says Tommy. "We are already getting calls from America and Australia to find out what is happening."

It’s all a long way from the original Irish National Club, based in Lower Briggate, Leeds. "I used to go to the ‘Old Nash’ when I dated my now wife, Helen," recalls Tommy.

"There was no big entrance. You went in a door, up some stairs and along a corridor to a little room with a piano at the back. Up some more stairs was the entertainment room with a small stage - I took to it to sing a few times!

"It was a meeting point for lonely emigrants in a strange city. People found work through word of mouth there, met future spouses and made lifelong pals. But the committee realized a bigger centre was needed when emigration increased and people were not returning home.

"Tetley’s Brewery loaned the committee the money to build the centre and Leeds Council charged us a peppercorn rent for the three-acre site where we are on now and which we eventually bought.

"I was working on building sites when the centre opened and would go there socially. I used to do a bit of singing in my parents Tom and Winnie’s pubs, including the famed Garden Gate, and was delighted to be asked to be MC on the official opening evening."

A short time later, Tommy was asked if he would be interested in managing the venue. "I talked about it with Helen and I said, “I’ll give it a go until you get someone right.” We thought I’d be here a year - 45 years on I’m still here. I’ve tried to retire but they won't let me," laughs the 79-year-old.

Over the ensuing years, the centre, its entertainment, sports teams and annual St Patrick’s Parade has embedded itself into the framework of Leeds life. Even in the 1970s when the political and warring factions of Northern Ireland spilled into the UK, the Irish in Leeds never suffered as in other major cities.

`I think that is because we quietly went about our own business,’ says Tommy. `We fitted in with the city and we never suffered any real trouble.’

The centre made TV history in 1973 when it played host to England fast bowler Fred Trueman presenting The Indoor League for Sunday lunchtime viewers.

Millions of viewers watched pub games such as bar billiards, darts, skittles, table football and shove ha’penny, paving the way for these activities to be seen as sports.

In 2010, the centre was recognised as 'the birthplace of televised darts' and a blue plaque was unveiled thereafter a year-long campaign to have the venue's role officially recognised. The campaign attracted support from the likes of Stephen Fry, Sebastian Faulks and Jeremy Paxman as well as dozens of players from past and present, including 15-times World Champion Phil 'The Power' Taylor.
And darts play an important part in this month’s launch of the centre’s special year on January 26 which marks the 50th anniversary of its first Sunday opening.

In tribute to its 1970s past, there will be a darts competition, card games and a snack bar along with the more traditional Celtic activities such as music and dance between noon and 5 pm

Liam Thompson, chairman of the centre’s committee, said he hopes the day will set the tone for the golden year: "In the past, the Irish came to dig the canals, the motorways and construct our buildings. Now you find those who come are educating our children, looking after our health, providing the legal services to the buildings and providing the finance. Irish DNA runs through the city likes the roads and canals our ancestors helped to build.

"We often get three generations of a family in here and we want 2020 to celebrate our past while looking to the future. We want the younger generations to be proud of those who paved the way before them. We are and this year is a tribute to our whole community."

Read more: Confessions of an innocent Irish girl in London in the “Swinging Sixties”

** The history of the Leeds Irish Centre will be recorded in a book by journalist Sheron Boyle who has strong family links to the venue.

Many in Leeds came from the West of Ireland, Mayo in particular. Both Tommy McLoughlin’s and Liam Thompson’s mothers hailed from the county.

`Likewise, my grandfather and his brothers left Mayo for West Yorkshire. Several settled in the city and used the centre. I was delighted to be asked to write the book and hope to do the centre’s members and Irish diaspora proud,’ said Yorkshire-based  Sheron.

The book will be out in Summer but despite the community’s rich history, the centre lacks archives so if anyone has photos, videos or memories they want to share in the book or on social media, please email sheronboyle@aol.com.