William Collins died in July 2020 at the age of 49 and is buried underneath a huge 37-ton memorial in a Sheffield cemetery. 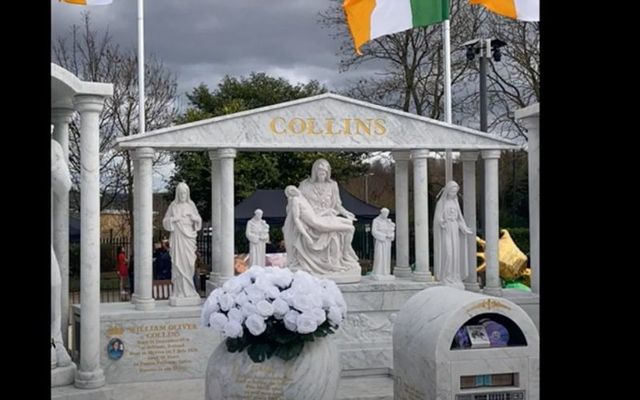 The family of an Irish man buried underneath what is believed to be the largest private grave in the United Kingdom has hired security to prevent the grave from being demolished.

William Collins died in July 2020 at the age of 49 and is buried underneath a 37-ton memorial in Sheffield Shiregreen Cemetery. The huge monument consists of several statues, four Irish flags, and a solar-powered jukebox.

However, the Sheffield City Council reportedly never approved the monument and is now considering removing the tribute to the father-of-nine and father bare-knuckle boxer, according to the Daily Sun.

The Collins family has vowed to fight any attempts to remove the memorial and insist that the Sheffield City Council gave permission for it to be built.

The family told the Sun that they have installed CCTV and hired private security to ensure that nothing happens to the memorial.

"I do not understand why they would take against this tribute to my father," William Collins' daughter Mary told the Sun.

"Any attempt to have us take this down would be fought legally as it would be a blatant matter of racism.

"The Council knew what we were doing. They signed it off. The footings were down for months and it took the builders two weeks to construct the headstone so they had plenty of chances to raise objections."

Mary Collins claimed that the memorial is not even the largest monument in the cemetery, stating that a memorial to the first Bishop of Sheffield is taller.

The Sheffield City Council said in a statement on March 24 that it had "reached out to the family".

"We have reached out to the family and intend to discuss changes which need to be made in order to satisfy the cemetery rules and take into consideration other cemetery users," the council said in a statement.

Councillor Alison Teal, Executive Member for Sustainable Neighbourhoods, Wellbeing, Parks and Leisure at Sheffield City Council, told the Sun that the council approved planning permission for the memorial but that the final structure differed significantly from the plan submitted to the council.