The community of Rathlin Island, a small island with a peak population of just over 100 people, has achieved zero cases of the virus through sheer grit and determination over a grueling 15-month spell. 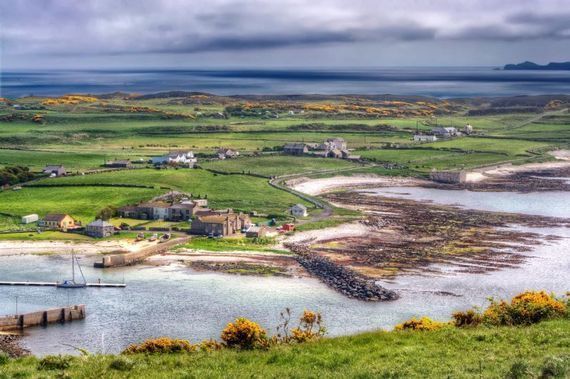 An Irish island off the coast of County Antrim has survived the past 15 months of the pandemic without a single case of COVID-19.

The community of Rathlin Island, a small island with a peak population of just over 100 people, has achieved zero cases of the virus through sheer grit and determination over a grueling 15-month spell.

With reports of the virus emerging all over Northern Ireland and the United Kingdom, the islanders took the early decision to close the island to outsiders.

Michael Cecil, chair of the island’s Development and Community Association, told the Belfast Telegraph that residents decided to close the island just before St. Patrick's Day last year when the virus was spiraling out of control throughout the UK.

"The number of visitors to the island was starting to increase and a decision was made to close the pub before St Patrick’s because we knew the potential that would have to spread the virus."

The community also worried about the difficulties of transporting a resident to hospital if the virus was imported onto the island and soon agreed to cancel the ferry service between Rathlin Island and the mainland.

The passenger ferry normally transported hundreds of people per day between the island and Ballycastle in County Antrim and was replaced by a cargo ferry that sailed once a day from the mainland, bringing in vital supplies such as food and medication.

"The crew actually never left the vessel. So, when they came to Ballycastle they just unloaded, but they remained on board and all deliveries were brought to the slipway, and then put into a van and put on board again," O'Driscoll told RTÉ News.

"Every single thing from the chemists, the groceries, absolutely everything had to come with us. There was minimum interlinking between the crew, and anybody else, and so the island, in effect, it's just closed down."

Ksenia Zywczuk, who runs the island shop, said that she faced many logistical problems while trying to source supplies during the lockdown. She told the Telegraph that she spent many hours trying to source essential items such as toilet paper, flour, and sugar, from stores on the mainland.

"It was hard work because the supermarkets were running out of the basics and we had to source them ourselves," she said.

"I spent hours on the internet trying to track things down and ringing around shops and suppliers."

She said that many residents had groceries delivered to their door by mainland stores in pre-covid times but said that all changed in March 2020.

Instead, islanders joined a WhatsApp group where they were able to relay their shopping lists to Zywczuk, who then tried to source items on the mainland.

"We had a WhatsApp group and there would be messages going out saying there was flour going and people would message if they needed any," she said.

The islanders endured several weeks of strict lockdown after taking the decision to close the island to tourists but were soon able to relax and enjoy the fine summer weather. The Belfast Telegraph reports that community barbecues were commonplace, although social distancing and face-coverings remained in place.

Rathlin Island is now gradually reopening to tourists as Northern Ireland's vaccination rollout continues to gather pace. The island's passenger ferry service has reduced at a limited capacity, while the island's pub also reopened for outdoor dining at the end of April.

The RSPB Rathlin West Light Seabird Centre additionally reopened to the public at the end of May.

There are strict rules in place to ensure that Rathlin Island remains COVID-free after its reopening.

Only three people are allowed into Zywczuk's shop at a time, while anyone wishing to visit the island must book tickets on the ferry at least 24 hours in advance.

O'Driscoll said that the island would be carefully reopening after living under a self-imposed lockdown for more than a year.

"I think we're going to tread cautiously as we come out of this, we certainly don't want to go back there again so I think it'll give visitors confidence that everything is correct and safe, and a good place to come."