Irish adventurer on fighting depression and rowing to New York

"I faced myself, the darkest places, so I am ready for anything. The whole point of why I talk about this now is I want to be a role model or an example for younger Irish guys." 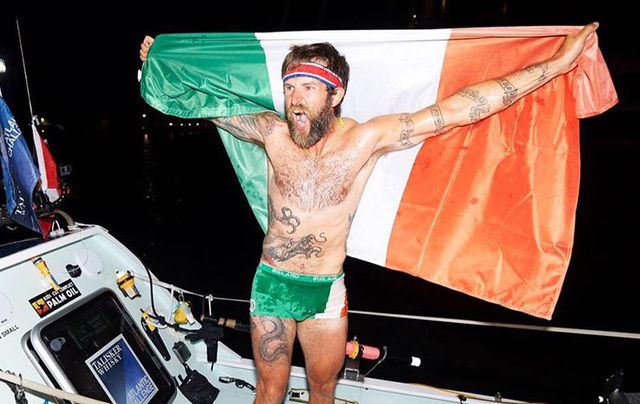 Gavan Hennigan: "I faced myself, the darkest places, so I am ready for anything.' Facebook

Gavan Hennigan’s cure for beating depression and despair? Row across the Atlantic, from Ireland to New York. He tells Cahir O'Doherty about his epic journey.

Extreme adventure isn’t a part of most people’s lives, if they’re lucky. For one thing, there’s the threat of something going disastrously wrong. For another, there’s the threat that it goes right, potentially turning you into an adrenaline junkie in the process, the kind of person for whom ordinary life is no longer an option.

Galway man Gavan Hennigan, 36, may be one of the latter kinds of people. An extreme adventurer and a major globetrotter to boot, he freely admits he wants a life with “a bit of an edge” to it.

You can’t really tell to look at him though, at least at first. As he arrives at the Ace Hotel in Midtown New York for this interview he’s looking stylish and very self-contained.

In February, he completed a solo row across the South Atlantic, setting a new international solo row record and an Irish solo Atlantic row record with his time of 49 days, 11 hours and 37 minutes.

Better yet, his efforts led to his mother being interviewed on The Late, Late Show at home on RTE, Ireland’s best known and longest running program.  It was the pinnacle of her life never mind his, Hennigan tells me.

But to look at him now you wouldn’t guess that he lived in a squat for years, or that he beat a serious alcohol and heroin addiction, or that at one time he hated himself so much he wanted to take his own life.

You wouldn’t guess that he’s the kind of person who would strip down to his shorts and row a boat across the Atlantic Ocean single handedly just for the sheer challenge of it, either – but he is.

It’s only when he talks that you can begin to understand just how different Hennigan is from most other Irish men of his age. “My dad was an alcoholic, he had a lot of mental health issues as well on top of that (he was bipolar),” he tells the Irish Voice.

“He wasn’t really around because my mum and he split up early, so he was never really a feature of my childhood. There was a bit of a void in my life in that sense. He was often in psychiatric units, so my mum raised us. The wreckage was there. I saw all the arguments they had.”

Growing up on Ireland’s west coast, Hennigan got his start as an adventurer early, mucking around on boats and then eventually getting into surfing.  Sadly, Hennigan’s father passed away a month before he started his record breaking Atlantic row.

Gaven Hennigan and his trusty boat.

“I had reconciled with my dad by then and I had come full circle, but when I was 18 I was actually fit to kill him. That abandonment stuff was really real for me then. He was the focus of all my anger when I was a teenager.”

In his early twenties Hennigan, spinning out of control in his personal life due to his upbringing and secretly unable to accept his sexuality, got into alcohol and heroin. His anger issues and his lack of perspective were the classic expressions of a child who had felt abandoned early on.

“Looking back there was no positive role model, there was no male influence in my life,” he says. “But at the time you don’t see any of that. It wasn’t until I put the alcohol and drugs down that I started to get a bit more perspective on life. Everything has been about perspective ever since.”

He didn’t come out until he went clean, he says. “A lot of energy had gone into repressing myself, keeping a lid on stuff. When I was drinking, I was very out of control. I used to black out. I remember thinking I’ve got to stop. I was afraid to become like my dad.”

There’s a saying in recovery circles that after years of numbness and bottling up your feelings the best thing is that you finally get your feelings back. It’s the worst thing too, they add.

Once he got clean he had to face one of his biggest demons: himself. Specifically, what he had been doing to himself, and why. After years of drifting he was ready to signal the change.

“That’s why I went out onto the Atlantic and made that journey. I faced myself, the darkest places, so I am ready for anything. The whole point of why I talk about this now is I want to be a role model or an example for younger Irish guys, you know?”

In his late teens and early twenties Hennigan lived in a squat in London with blacked out windows and a mattress on the ground for years. He partied, he went to raves, and he did a bit of traveling.

“It was sad,” he says. “It was all connected to my low self-esteem and low self-worth.”

There had been no one in his life to root for him, to tell him that he could do anything.

“It’s so different here in America. They have incredible self-belief here. We don’t do that in Ireland,” he says.

“It’s very sad that at 19 and 20 I was thinking that drugs and suicide were the answer. Where are we going wrong as a society that a 20-year-old is thinking like that? I look back and see that my possibilities were endless at the time. I just couldn’t see them. It’s taken me a lot of years to see that.”

Now, alongside his record-breaking ocean challenges, Hennigan works with the Irish mental health group Jigsaw. His long journey out of fear toward acceptance and peace is one they know resonates powerfully.

What slowed down his self-acceptance around being gay was his discovery that he liked men he dated to be at least 20 years older than him. “I wondered what all that was about and it definitely got in the way,” he confesses.

Maybe it’s just what you like, I tell him. “Well yes, now I see that but for a long time in my twenties I didn’t.”

At the time it seemed to him that it would be unlikely he’d ever meet someone special and form a relationship.  “There was no horizon. That feeling of despair was crippling to me,” he remembered.

It didn’t really lift until he began a three-year relationship in his late twenties. Suddenly there was real possibility after all.

Is it hard to meet people with a sense of adventure as large as your own now, I ask him? When you go on adventures as mighty as rowing across an ocean on your own, how do you get back into ordinary life?

“It's funny because I feel sometimes I have everything backwards. Throw me into a boat in the middle of an ocean and I’m grand. It's the challenge of organizing my sock drawer that really freaks me out sometimes.”

Next up, Hennigan plans to row solo from New York to Galway but his doctor has said his back must first heal from his most recent voyage.

“I’ve a stress fracture in my back so I have to put it off for now. It won’t happen this summer. The boat’s going in storage here. It’s not a serious injury but it needs time and there’s a serious weather window for rowing to Ireland. I want to be ready to go when it’s time.”

Meantime he will be busy talking to and inspiring young Irish people about the importance of good mental and emotional health. Having walked the walk, he can talk the talk now, because these days he’s become the hero that he always wanted.