For one Brooklyn neighborhood, this weekend marks St. Farrell’s Day

Friday might be St. Patrick's Day, but for the residents of Brooklyn's Irish neighborhood Windsor Terrace, Sunday is St. Farrell's Day, to be spent at Farrell's Bar & Grill. 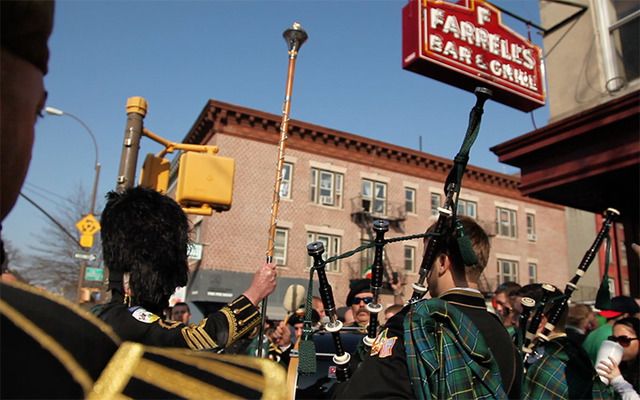 Every year on the third Sunday of March the Brooklyn neighborhood of Windsor Terrace turns into a little slice of Ireland, or at least a very intoxicated Americanized version. The sound of bagpipes and trad music float through the streets as locals skip out on Sunday brunch to grab green bagels from Terrace and watch the kids from Buckley’s School of Irish Dance perform in Bartel Pritchard Circle.

It may sound like every other St. Patrick’s Day celebration in America, but this parade has something the rest of them don’t, Farrell’s Bar & Grill.

The Brooklyn Saint Patrick’s Day Parade might as well be an organized march straight to the doors of Farrell’s. The bagpipers' last stop of the parade is right outside the bar, where they play a few songs before they move inside to grab a container (that’s Farrell’s lingo for the 32oz Styrofoam cups they serve their beer in).

Although you’ll see the bar’s biggest crowd of the year on parade day that doesn’t mean it is forgotten the rest of the year. Farrell’s first opened its door in 1933 at the end of Prohibition. It’s rumored to not have served women without a male chaperone until the 1980s, a fact some might find offensive, but I think adds to its rough charm. It’s probably what led to Farrell’s reputation as an old man bar or cop and firemen spot.

Read More: The enduring community of a Brooklyn Irish bar

Farrell’s is more than the neighborhood’s watering hole – it’s a community center that brings together people of different generations.

Houlie, who has owned Farrell’s for more than 20 years, organizes neighborhood events all year long, like last year’s cruise to the Bahamas, the annual trip to Cape Cod, and of course the local neighborhood fundraisers in Shepherd’s Hall. Farrell’s is the glue that holds the evolving neighborhood together.

Farrell's from above. Photo: Edward Heegan

The demographic of Windsor Terrace is changing; the once predominantly Irish working class neighborhood is becoming home to the yuppies that have been priced out of Park Slope and Williamsburg. Families that have lived here for generations are forced to move, while the families that can afford to stay become onlookers as their neighborhood drastically changes around them. But no matter what, Farrell’s stays the same. Parade day brings back all the people who have moved out of Windsor Terrace and Farrell’s gives them a second home to come back to.

This is why Farrell’s is the unofficial headquarters of the Brooklyn Saint Patrick’s Day parade.