The enduring community of a Brooklyn Irish bar

The patrons of Farrell's in Brooklyn's Windsor Terrace don't just drink together, they also go on vacation together. 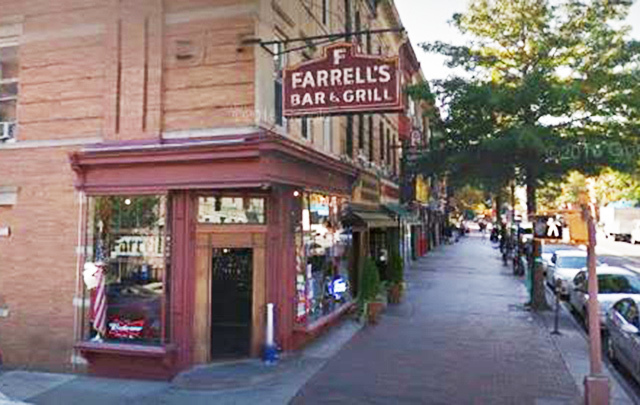 Every fall for the last 15 years, Jimmy Houlihan, the owner of Farrell’s, the well-known Irish bar in Windsor Terrace, Brooklyn, has been organizing a five-day trip up to the Irish Village in Yarmouth, Cape Cod. Each year, “Houlie,” as he is called in the old neighborhood, gets about 70 people to go along, and most of them, upon arrival, leave a $50 deposit at the front desk for the next year.

Each year he gets the same room on the first floor. He has been coming here so long that for 2016 the managers had a talented young artist, who also works there as a waitress, paint a large mural of Farrell’s Bar next to the front door of his room. The picture – by Milica Katalinic, a native of Bor in Serbia —  is so perfect you almost feel like you are standing on 9th Avenue in front of the bar.

Jimmy Houlihan, left, and Pat Fenton, pictured beside the painting of Farrell’s by Milica Katalinic.

Last September, Houlie and his wife Eileen came by the Cell Theatre in Chelsea to see a play I wrote that takes place in Farrell’s, “Stoopdreamer.” The actor Jack O’Connell played the character Jimmy the Bartender, who is based on Jimmy Houlihan.

Watching him and his wife from the wings that night as Jack, and two other actors, Robin Leslie Brown and Bill Cwikowski, brought the audience into Farrell’s Bar with them, and sent them back to a lost part of Irish, working-class Windsor Terrace, I realized that, although later the play would get laudatory reviews and five nominations in the 1st Irish Festival, Houlie and Eileen were the critics that I was most interested in.

The Windsor Terrace of the late 1940s and ‘50s, and into the ‘60s that we came out of the hallowed halls of Holy Name Parochial School up on the hill area of 9th Avenue that we walked down as young boys, Holy Name Church next to it where we filed up in silence each Sunday morning to kneel at the rail and receive holy communion made us part of a special time and place in Brooklyn that has survived, if only in our memories.  So when he invited me and my wife, Patricia, up to the Irish Village in Cape Cod with him for the next September trip, we signed up.

A few weeks ago, looking around the large dining hall on our last night at the Irish Village, pints flowing as we listened to “The Fields of Athenry” being played live up on the stage, couples dancing closely, it made me think that Windsor Terrace is truly a place you never really leave, even when gathered in another state.

Not many people come from a neighborhood where the wooden bar at which their fathers drank at is still in place – in the case of Farrell’s since 1933, the year Prohibition was repealed.

The room was filled with the faces of the Irish, faces that were a semblance of an early generation I remember, the faces of our Irish-born fathers. And it gave me a warm feeling to think that we had taken their traditions and values along with us.

Farrell’s Bar is like a cultural museum of early Irish working-class Brooklyn. It contains what is left of the oral history of a generation. When you enter the front door you enter the past. The original hammered tin ceiling that our fathers drank under is still there, along with the long row of back-bar mirrors that held their images.  Pete Hamill’s father from Belfast drank in there; my father from Galway did too.

It’s the final memory of a great Irish working-class opera that was once Windsor Terrace. And Jimmy Houlihan is still keeping it alive.