20 years after 9/11, the FDNY and NYPD's Gaelic football teams continue on with the "new normal" and gear up for their match in Rockland. 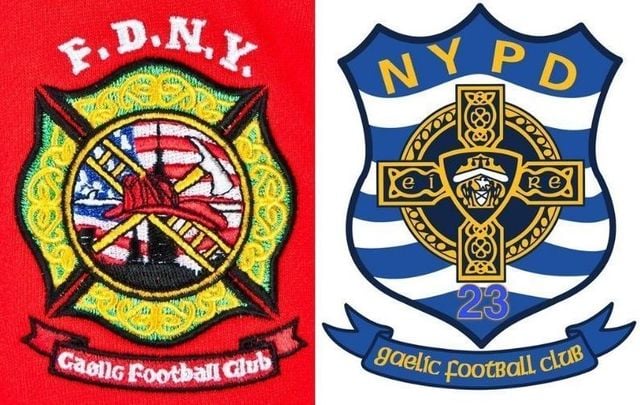 The Gaelic football teams of the FDNY and NYPD will face off again this Saturday, September 18 in Rockland. FDNY Gaelic Football / NYPD Gaelic Football

We’ve made murals and memorials. We’ve renamed streets and planted trees in remembrance because we want to believe in a God or in the idea that there is a world above the reach of the mortals. A kingdom, a promised land we cannot see, but only have faith in its existence.

We created the “new normal” because life quickly, much too quickly, goes on.

In the year that followed 9/11, members of the FDNY and NYPD’s Gaelic teams did their best to create their new normal, and their efforts continue this Saturday, September 18, with the annual NYPD vs. FDNY football game at the Rockland GAA field, 160 Orangeburg Road in Orangeburg, New York with kickoff at 5 p.m.

🚔 NYPD vs FDNY 🚒 This Saturday, September 18th at 5 PM, the Annual NYPD vs. FDNY Gaelic football game will take place at...

“The first game back versus the FDNY was definitely weird,” NYPD Detective Paddy Donohue told the Irish Voice. “I would’ve been playing goalkeeper at that time (after 9/11) and I remember taking a kick-out. We probably would’ve tried to have a game plan of avoiding kicking in the direction of Dennis (McHugh) as he won so much ball for the fire department. I couldn’t help thinking how weird and sad it was that I was now looking out at the middle of the park and he wasn’t there.”

As the city continued to dust itself off over that next year, so too did the police and fire Gaelic teams.

“After what we all went through, there was no way either one of us was going to let these teams fold,” said NYPD Detective James Huvane. “We had to carry on to keep the memory of these guys alive.

Firefighter Billy Nolan, now retired out of Engine 265 in Rockaway, was president of the FDNY Gaelic football team at the time of 9/11.

“I remember traveling into Manhattan and hearing that the buildings had collapsed. I kept trying to get a glimpse of them on the way in. It was just so hard to believe they were totally gone. You’re always looking for someone.  It’s what we did, but you couldn’t find anyone there. The steel and debris was just everywhere.”

Nolan would have been one of the first people to start putting pieces together for the annual FDNY vs. NYPD game.

“Billy Nolan for them and myself and Ciaran Croke for us and a few others would’ve gotten together to talk about getting these games going again,” says Huvane. “We were both so committed to honoring these guys’ memories that we just had to do it.”

“Before 9/11, make no mistake, we wanted to hammer them,” says Nolan. “I don’t know if that ever really changes because it’s two good teams looking to win at all costs.

“But after 9/11 there was definitely a sense of appreciation that this is a great way to bring us all together again. It was great for our morale and I’m sure for them as well.”

“Oh, they were bloodbaths sometimes,” says FDNY Captain Denis McCool through a booming laugh. “Before 9/11, we really went at each other, but they weren’t dirty, they were just tough, hard-hitting matches.”

“I don’t think that ever changed,” added FDNY Chief Eddie Boles, now in the 17th Battalion in the Bronx. “Those were some great matches we had with the cops because we both had high-caliber footballers. I think what might’ve changed after 9/11 was the empathy we had for each other.”

Over the past 20 years, since 9/11, both the police and fire departments have had a turnover of guys. Many of those guys who were in the middle or beginning of their careers on September 11 have now retired.

However, the GAA tradition still continues with new recruits joining both departments and carrying on the proud Irish heritage of these teams. They may be hired as baby-faced kids, but in a place like New York, they lose their training wheels fairly quickly on the city streets.

Their ambition to continue the legacy of these special games comes from both a place of lineage and company pride. Detective Mike Greaney is now a 13 year veteran of the NYPD and is the current president of the NYPD Gaelic Football Club.

“This game is the pinnacle of our year. We’ve started to play more and more football throughout the year as we started to enter teams in the New York GAA divisions, but nothing compares to the PD/FD games.”

“I need us to win these games so I can rub it in with my father,” says Firefighter Tommy Fennell of Engine 70. “My father retired as a detective in the Bronx and I grew up with stories about the cops and how great they were. When I got on the job in 2004, all I wanted to do was beat them.”

“It’s all about keeping the tradition alive,” says Sergeant Jim Lundy, a 10 year veteran of the NYPD now in the Firearm Investigations Unit.

“There is such a long history of Irish and Irish Americans in the NYPD, and having these clubs and these games with the FDNY is just one way we can honor that tradition. Our club’s motto is Keeping the Heritage Alive. It’s a great nod to the Irish American history on the job and these games definitely give you a great sense of pride in both your heritage as well as your department.” “It’s definitely important,” says Lundy when asked how important is it to beat the FDNY.

“With the Irish American community so tight-knit – every cop knows a fireman, every fireman knows a cop. Some families have both cops and firemen so it’s definitely about bragging rights. It’s nice to be the one holding the trophy after the game rather than your rivals.”

“It’s the most important thing,” says NYPD Detective Brian Doherty of the Criminal Intel Division. “Beating the FDNY is the main focus of our club year to year and if you were to ask any of those guys in the fire department, they’d probably say the same thing.”

“It’s the greatest rivalry,” says Firefighter Mike Hagerdan. “You’re out there playing for pride. You want to get out there and give them a hard, tough game. It’s funny because we both want to knock each other out there, but after you can’t wait to have a drink with them and catch up.”

For the new generation of cops and firemen, 9/11 will always be remembered. Each firehouse has memorials or shrines. Sparkling clean red fire trucks have the names of past members inscribed in them who perished on September 11.

Hanging on the wall inside the quarters of Engine 70, Tower Ladder 53 is a square piece of steel. Exhumed from the sarcophagus of what became known as The Pile. It sits inside a square box, mounted on the wall.

“There’s one in every firehouse,” says Fennell.

“Never forget,” Hargedan adds. “It’s as true now as it was then. It’s not just a phrase.  It’s a mentality.”

“This game is legit huge,” says Police Officer Cillian McNamara, a native of Kilkishen, Co. Clare. “New York has such a massive Irish community. We have guys we play with who have brothers, fathers, uncles who have participated at one time or another in this match.

“On top of that, within the Irish community, you come across so many people who have family members or friends who are or would’ve been cops or firemen. It’s such an easy connection.”

The FDNY and NYPD have turned a simple game into a vehicle to not only continue the unique bond with each other, but to also bring some sort of needed help to charitable causes. The NYPD will be donating their side of the proceeds to family of Liam Richards – the three-year-old son of Detective Thomas Richards. Liam was diagnosed with a rare form a leukemia called Juvenile Myelomonocytic Leukemia.

“Of course we want to beat the FDNY, but we’ve really tried our best to give something back out of these games,” says Greaney.

“Every year we raise money to help a family of one of our own in need. What we raise will hopefully put a little bit more money in the families’ pockets who are battling cancer or some sort of illness where medical bills can become astronomical. We obviously want to raise as much as possible, but we know whatever we do raise will go to good use. It could be a medical bill, or just money to help with transportation to and from medical procedures or even just helping families put food on the table.”

The FDNY will be donating their proceeds to active member Firefighter Jim Adamo of Engine 93/Ladder 45. Adamo received tragic news involving the death of his brother and sister-in-law just over a year ago. Adamo and his wife Caroline are in the process of adopting their three young children ages eight, five, and one. The Adamos already have four children of their own and will now have seven kids in the house all under the age of 10.

The tradition continues this Saturday, September 18 at the Rockland GAA Center of Excellence. Tickets are $10 in advance or $15 at the gate. Entertainment will be provided by the Narrowbacks. For information contact Detective Greaney at 914-469-1620 or Firefighter Enright at 347-996-2830.