Cavan teenager Eden Heaslip's suicide was driven by years of abusive bullying, his devastated family, who has launched an anti-bullying campaign, reveals. 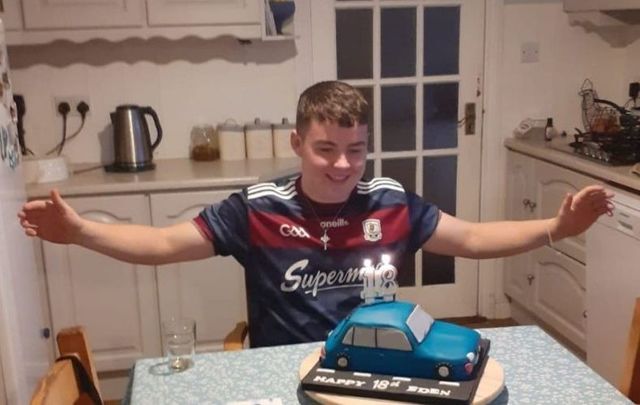 The parents of an Irish 18-year-old who took his own life have revealed that he suffered years of abusive bullying.

Eden Heaslip, who grew up in the tiny rural village of Crosskeys in County Cavan, committed suicide in September 2021, just two weeks after his 18th birthday.

Four months after his tragic death, his parents, Maggie and Raymond, and his siblings, Chloe and Finn, spoke to RTÉ's Prime Time about how they have been left devastated by his suicide.

His father described Eden as a "happy-go-lucky child" and the "character of the family".

Four months after Eden Heaslip died by suicide, his family have been left devastated. Their lives will never be the same explains @ConorMcMorrow | #rtept | Read more: https://t.co/pwyWMEK1ZZ pic.twitter.com/uQ9euOVKdW

Raymond told Prime Time that the family first noticed a change in Eden when he started secondary school, stating that he would often go straight to his room after coming home from school.

"He would have come home in the evenings and been straight to his room. He didn't seem to be happy in himself," Raymond told Prime Time.

Raymond is a member of the Church of Ireland, while Eden's mother Maggie is a Catholic.

"We are a mixed marriage here, and we have a happy mixed marriage. We learned to accept each other’s religions and we lived it," Raymond told Prime Time.

However, he said that Eden faced relentless bullying because of the surname "Heaslip", a traditionally Protestant name in the area.

"They were deciding, by their own ignorance, what he was, or who he was," Raymond said.

Finn, who is a few years older than Eden, said that he tried to step in whenever he saw people bullying his younger brother.

However, Eden asked him not to intervene, stating that it just made the bullying worse, while it also gave his bullies something else to tease him about.

When Eden was 17, he told his parents about his ordeals in school and they arranged for him to attend private counseling.

They also asked family friend Fr. Jason Murphy to come and have a chat with Eden about the bullying he was facing.

Fr. Jason told Prime Time that he spoke to Eden for several hours one Sunday afternoon.

"He talked about bullying that he experienced over a period of years, and he talked about it without any form of emotion," Fr Jason told Prime Time.

"It was as if there was an emptiness there – and this had become part and parcel of his life, and it was his every day. It was his normal."

Fr. Jason said that he broke down listening to Eden's experiences, prompting Eden to get up and hand him a piece of kitchen roll.

"He was ministering to me. I was there to listen to him, and yet he was the one that was comforting me as I listened to his pain."

The following summer, Eden told his father about the full extent of the bullying.

"Dad, they get me and they put my head down the toilet," he told his father.

Raymond recalled that Eden described the bullying as "never-ending", adding that he was kicked often.

"Dad, they knock me to the ground and I couldn’t understand it. They would say to me, then, ‘Go home to your own country, you black Protestant bastard."

Eden's parents reported the abuse to An Garda Síochána, but they were hampered in their efforts by Eden's refusal to name the bullies because he was afraid.

They said that Eden became very anxious and would remain in the car during trips to the local town.

She said that the online abuse continued even after Eden died, with some people sending him horrific messages on Instagram.

Eden joined a new school in late 2020 and was "getting on great" and making new friends, according to his father.

However, the various Covid-19 lockdowns made it harder for him to connect with people.

In September 2021, Eden left school to begin an apprenticeship as a car mechanic, his long-standing dream job.

Fr. Jason said that he talked to Eden a few days before his death and added that he was "full of joy" with his new apprenticeship.

During their conversation, Eden mentioned that he had seen Fr. Jason at an anniversary mass for a local man who had committed suicide the previous year.

"I just want to be sure that you wouldn’t think of something like that?" he asked Eden.

Fr. Jason said that Eden "absolutely" convinced him that everything was alright.

However, Eden was attending Child and Adolescent Mental Health Services, the HSE's mental health service for people under the age of 18, due to continued struggles with his mental health.

Fr. Jason recalled getting a call from Eden's aunt, who told him that he had been taken to hospital.

The family asked Fr. Jason to go to the hospital as they believed a priest had a better chance of gaining access under the Covid-19 restrictions at the time.

He recalled how a nurse took him to the room where Eden was and said that it was obvious that he had died.

Fr. Jason stayed in the room for 30 minutes while he waited for Eden's parents to arrive and said that he talked to him as if he were still alive.

"You promised me, Eden, that you wouldn't do this."

Eden's family has started an anti-bullying campaign in the wake of his death and is calling for more action against cyberbullying.

His mother Maggie said that she was horrified that people were still sending abusive messages to her son after he died.

"People can set up an Instagram account under a false name and false everything, post their poison about him and then close it straight away – and nobody can trace them."

The family also raised concerns about the Snapchat messaging app, which deletes messages once they are read.

Raymond said that Eden faced considerable bullying on the app, noting that all traces of the bullying "disappears".

The family is also trying to raise awareness about "Coco's Law", new anti-online bullying legislation that came into effect in 2021 following the relentless campaigning of Jackie Fox, the mother of Nicole "Coco" Fox, who committed suicide in 2018 after being bullied for years.

Chloe said that her family was not aware of Coco's Law when Eden was alive.

The Heaslip family is additionally trying to raise awareness about anti-bullying through the sale of their "Be Buddies, Not Bullies" car stickers.

They have sold thousands of stickers to people in Ireland, Australia, the USA, and the UK, while they have also started a GoFundMe to help raise money for the campaign. The online fundraiser calls on people to shave, dye, or wax their hair and has raised €26,000 in Eden's memory.