Ciarán Moore was left in a coma after being hit with a "coward's punch" while out with family and friends in Dorchester last December. 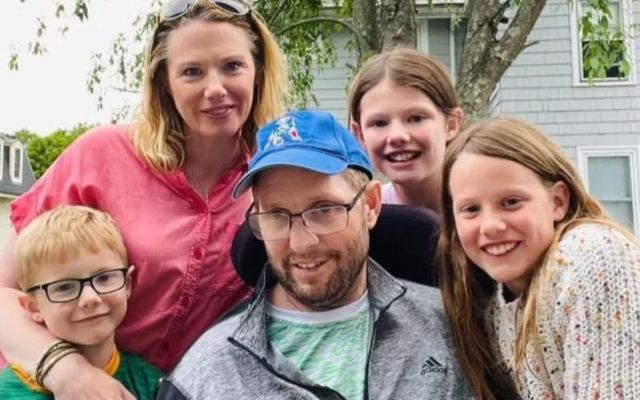 Ciarán Moore with his wife Shauna and their three children Eve, Emme, and Micheál. GoFundMe

The Irish community in Boston has rallied around a Laois man who suffered life-changing brain injuries during an unprovoked attack in a Dorchester pub last December.

Ciarán Moore was on a Christmas night out with friends and family in the Old Dorchester Post in Adams Village on December 27, 2021, when he suffered an unprovoked "coward's punch", his family said on GoFundMe.

Ciarán suffered a traumatic brain injury and was in a coma by the time he arrived at the ER at Boston Medical Center, while doctors told his family that it was unclear whether he would survive the injury. They also informed the family that there was a good chance that Ciarán would be in a vegetative state even if he survived.

Ciarán spent two months in ICU before being transferred to Spaulding Rehabilitation Hospital to continue his recovery. After almost four months of many ups and downs, he was finally deemed well enough to return home on June 14.

Confined to a wheelchair, Ciarán cannot use his left arm or hand and is currently learning how to walk again. His eyesight has also been impaired.

However, he has been making undeniable progress and was taken off tube feeding during the summer. His recovery has allowed him to make up for lost time with his wife Shauna and his three children Eve, Emme, and Micheál.

Ciarán, who moved to Boston with his two brothers about 20 years ago, still requires round-the-clock care, long-term therapy, and rehabilitation as he continues his recovery.

The Irish community in Boston has rallied to the Moore family's side since Ciarán suffered the injury last December, with a GoFundMe raising €66,000 to help cover the significant costs of his treatment.

Friends, family, and community members gathered in Florian Hall in Boston on Sunday, October 2, for the climax of these fundraising efforts.

In a recent interview with Dot News, Shauna paid tribute to anyone who had supported the fundraising campaign.

"We want to express our gratitude in so many ways. Each effort for us has not gone unnoticed and we can never thank everyone enough for how they’ve rallied to support us in this time," Shauna said.

Declan Cronin, a Boston resident who has led the fundraising campaign, said the community solidarity in the wake of Ciarán's injury was inspiring.

"It’s such a sad story and the outpouring of goodwill from everyone in the community was an inspiration to our committee," Cronin said.

"Even people who were helping quietly behind the scenes were amazing. Ciaran was a good friend to everyone and supported anyone in need. He was always there for others, and if this were any one of us, he would be there. We felt it important to be there for him and his family at this moment."