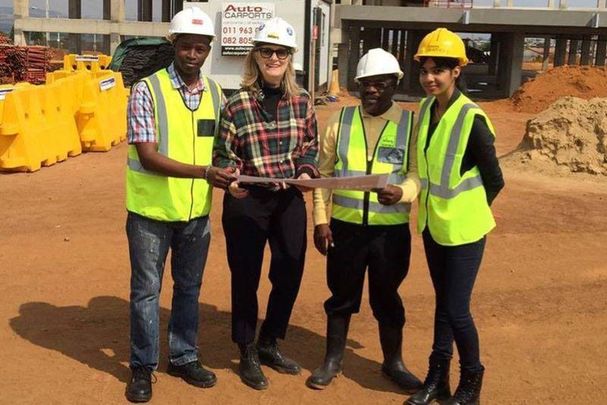 Deborah Terhune, second from left, at the building site for the Devland Soweto Education Campus in South Africa. Growing Up Africa, Facebook

Deborah Terhune, the founder of the nonprofit Growing Up Africa, recently reached out to IrishCentral in hopes of sharing a message of gratitude with Chuck Feeney.

Terhune is the founder and CEO of Growing Up Africa (GUA), a nonprofit that drives research-based development and design to build resilient education structures for a future of ecological, social, and economical sustainability.

The nonprofit organization recently announced that it has built and donated the Devland Soweto Education Campus, a project Terhune conceived and GUA built, to the University of Johannesburg in South Africa.

In a letter to the editors at IrishCentral, Terhune was keen to explain how Chuck Feeney, the Irish American billionaire who famously went "broke" after donating most of his fortune, inspired her journey.

The following are Terhune’s words:

“I moved to 800 Fifth Avenue in 2006 after spending many years in South Africa. The doorman of more than 30 years, Dennis O’Connell, heard that I was building schools in South Africa and thought I might find Chuck Feeney’s book by Conor O'Clery [The Billionaire Who Wasn't: How Chuck Feeney Made and Gave Away a Fortune Without Anyone Knowing] interesting.

“I came to NYC exhausted from my work in South Africa, so the book sat on my desk for quite a while. A bit disillusioned with my decision to move to NYC, I picked up the book and started to read. A most riveting read.

“It did not take me long to pack up the rental apartment and return to South Africa. I knew I did not have ‘billions,’ but what I did know was that I had the chutzpah and many years of property development and construction experience.

"I decided to build an education campus in Soweto and donate the campus on completion to the University of Johannesburg.

“That was my secret until I met with the university's Vice-Chancellor, Prof Tshilidzi Marwala, the author of more than 30 books who, like me, is interested in 4IR [the Fourth Industrial Revolution]. He was most enthused in accepting the gift officially.

"However, it has taken more than three years for the lawyers (ENS Africa) to put together, what I found, was a first of its kind and for the university council to sign the agreement. During that time, no one knew of my donation intention.

It started with an introduction by my friend Joy Coplan to Deborah Terhune. Now our innovation campus in Devland is ready transform Africa into the fourth industrial age. Thank you Growing Up Africa and Deborah Terhune for this magnificent donation. Zwanda zwi a tanzwana. pic.twitter.com/2cz5YFFEsj

"So much of what I thought was crazy was validated as truth and possible while reading Chuck’s journey. He kept my fire burning.

“Toyota loaned me a car, a businesswoman with property gave me a room to stay, and the rest is history [10 years]! I wasn’t looking for a lifestyle, rather I was looking to create a ‘style of giving.’

“What I found was no one was coming forth to give. I decided if I could fund the labor and convince companies to donate the material, professional services pro bono, etc., I would tackle what became a state-of-the-art education campus for a curriculum of STEAM [science, technology, engineering, arts, and mathematics] built in an under-resourced and under-served area of Soweto, an  R110,000,000M donation.

“The only support and encouragement to stay the course came from nights of reading Chuck’s book. It is highlighted from start to finish. I stayed the course because of Charles 'Chuck' Feeney, this I know for certain.

“I grew up in a small town in Pennsylvania, second oldest of seven (6 girls 1 boy). I built a life from humble beginnings. I had no idea where my life was headed when I left home at 18. God knew and I knew that all I had to do was follow his lead. There were more times than not, when I would say, “who, me?” Even a book handed over the desk by the doorman at 800 Fifth Avenue.

“I might think this was all serendipity? God knew what he wanted me to do with my life. I was not about to question.

“God and Chuck Feeney’s life story kept me focused.  I just wanted to say thank you to Chuck for allowing Conor O’Clery to write his story. Keeping his anonymity without sharing, I may never have built the campus. I can honestly say, that without the twists and turns in Chuck’s story and how he managed I would not have been able to manage my own twists and turns.

“It is with my deepest gratitude that I could be the messenger of God’s will and that he presented an earthly being, Chuck Feeney, that would come to give me the inspiration I needed to complete the campus.

"I know we can all follow in Chuck Feeny's footsteps. His heart rings true."

You can learn more about Deborah Terhune's nonprofit Growing Up Africa here.