The Ancient Order of Hibernians has penned a letter to the Vice President in which they remind him “Ireland did not create Brexit.” 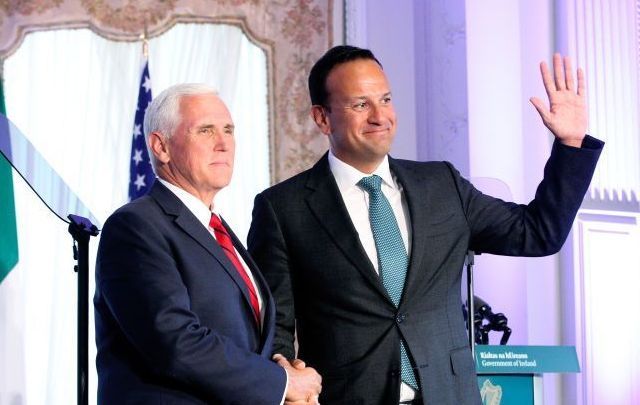 US Vice President Mike Pence and Taoiseach Leo Varadkar hold a press conference at Farmleigh House on September 3, 2019, in Dublin, Ireland. The Vice President is on an official two-day visit to Ireland and is staying at President Trump's golf course resort Doonbeg in County Clare. Pool/Getty Images

The Ancient Order of Hibernians has penned a letter to the Vice President in which they remind him “Ireland did not create Brexit.”

In a letter written by National Political Education Chair Neil Cosgrove to US Vice President Michael Pence, the Ancient Order of Hibernians has expressed concern regarding recent comments made by the Vice President while visiting Ireland which admonished the Irish government to “to negotiate in good faith with prime minister Johnson, and work to reach an agreement that respects the United Kingdom’s sovereignty.”

US Vice President Mike Pence expressed his support for both Brexit and the Good Friday Agreement during a press gaggle at the US Ambassador to Ireland Edward Crawford's Dublin residence on Tuesday.

On Tuesday, the US Vice President offered remarks during a press gaggle at Deerfield Residence in which he said: “On the subject of Brexit, we made it very clear the United States of America supports the United Kingdom’s decision to leave the European Union.

“That being said, we recognize that Ireland has unique challenges with their northern border.  And we’re absolutely determined to play a positive role in ensuring that the historic Good Friday Agreement that the United States helped to broker more than 20 years ago is preserved in the context of any Brexit agreement.

“But I did encourage Taoiseach Varadkar to convey to other leaders across the European Union some of Ireland’s unique challenges and encourage the EU to come to the table.”

His remarks have caused controversy as they appear to admonish the Irish government on the UK’s failure to leave the European Union on time, with Irish America’s largest organization the Ancient Order of Hibernians penning a letter to the VP to remind him of Ireland’s constant flagging of the border issue in the lead up to the referendum.

The letter states: “We are greatly troubled by the sentiment you expressed Mr. Vice President in your statement ‘As the deadline for Brexit approaches we urge Ireland and the European Union, as well, to negotiate in good faith with prime minister Johnson, and work to reach an agreement that respects the United Kingdom’s sovereignty.’

“Respectfully Mr. Vice President, the sovereignty of the Republic of Ireland must be accorded equal respect.  As Britain’s only land border with the E.U., the people of Ireland are being asked to bear the consequence of a Brexit where the citizens of the Republic of Ireland had no voice in the matter and which the community of Northern Ireland rejected by 56% at the polls. Self-determination is as much the birthright of the Irish as it is the British or American people. As such, the U.S. stance toward Ireland regarding Brexit should be one of understanding and engagement rather than chiding.

“Your admonition Mr. Vice President appears particularly inapt when it is remembered that in the run-up to the Brexit referendum those who warned of the difficulties in reconciling Brexit with the U.K.’s commitments under the Good Friday Agreement were dismissed as “scaremongers” and ‘project fear’ by people who now hold senior positions in the current British government.  There was little ‘good faith’ or ‘respect’ shown during the Brexit campaign as to the collateral consequences of Brexit to the people of Ireland and their sovereignty.

“Now that those warnings have been validated, the British government is trying to rewrite history and reverse accountability for this crisis of its own making.  We remind you Mr. Vice President of the “Pottery Barn Rule”: you break it, you own it. Ireland did not create Brexit, Britain did. It is not the duty of Ireland to sacrifice itself to make Britain’s decision to pursue Brexit work.  To date, Ireland has shown both considerable good faith and patience with a situation which has been foisted on them while still honoring its sovereign responsibility to protect the peace and prosperity of its citizens.

“We are also concerned with the tepidity in your statement ‘we’ll continue to affirm our belief the Good Friday Agreement needs to be intact.’  As a broker and co-guarantor of one of history’s most significant diplomatic triumphs in the cause of peace, the United States must insist, not simply believe, that the Good Friday Agreement be preserved. Ordinary prudence would dictate against entering into any new deal, trade or otherwise, with a partner who did not honor their previous commitments under the internationally recognized treaty.

“As an Irish American, you are likely aware that the United States and the people of Ireland have enjoyed their own ‘special relationship’ which long predates that with Great Britain; extending back to the American Revolution which should also be honored.  Respecting the sovereignty of the British people should not come at the cost of sacrificing Ireland to the exigencies of Brexit.”

What did you make of the Vice President’s comments in Ireland? Let us know in the comments section, below.