Sean Simon is custodian of Cloontykilla Castle and McDermott's Castle is aiming to restore both castles to their former glory. 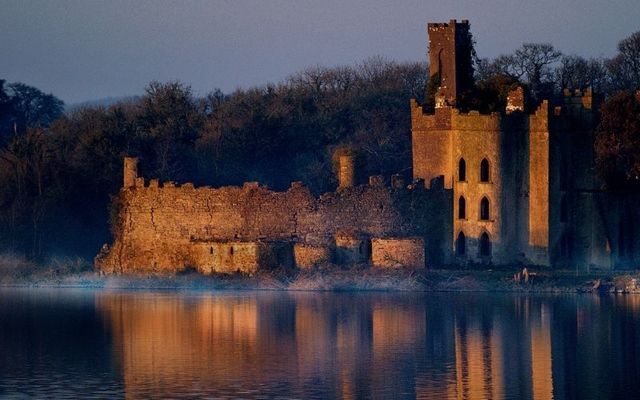 An Irish West End actor is calling on Irish-Americans to invest in his "Historic Estate Investment Trust" to save Irish castles and other ancient buildings in danger of collapsing.

Roscommon native Sean Simon, who has performed numerous lead roles on the West End, has been the custodian of Cloontykilla Castle and McDermott's Castle since 1997 and is aiming to restore both castles to their former glory.

He has almost completed the restoration of Cloontykilla Castle but faces an ongoing battle to ensure that McDermott's Castle remains standing before he can restore it.

Simon has taken almost 25 years to restore Cloontykilla Castle to its original state due to a number of factors, including the 2008 financial crash, and is keen to avoid similar delays with any future projects that he undertakes.

He told IrishCentral that it would take him roughly five years to restore an ancient castle if he had the funds available from the outset and is subsequently seeking investors to help get other projects off the ground. 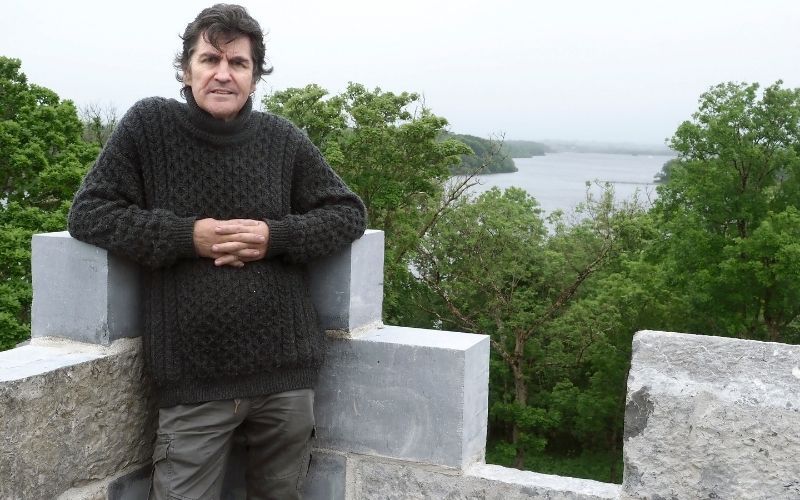 While Simon is almost ready to open Cloontykilla Castle to the public, he has yet to begin work on McDermott's Castle, otherwise known as Castle Island.

The 14th-century castle is steeped in Irish history and was once home to the Mac Diarmada clan that ruled the kingdom of Moylurg in Connacht.

The castle was in a state of disrepair by the time Simon acquired it in 1997 and he faced a constant battle with the ivy and brushwood that threatened to pull the walls down.

Simon has cut back the vegetation and regularly injects lime-mortar into the castle walls to further strengthen them against the elements and has ensured the castle's survival. For now.

However, he said that the conservation of ancient ruins is an ongoing battle and added that lime-mortar is frequently washed out of the seven-foot-thick castle walls by rainwater that seeps into the building because the castle has no roof.

The absence of window frames and glass windows allows lime-mortar to escape through gothic arches that once served as the castle's windows.

The ivy that once threatened the castle's structure has also returned, although not as thick or as dangerous as before.

Simon is an ardent believer in restoration over conservation, stating that the conservation of ancient ruins is "dead money".

"The Office of Public Works spends a lot of money conserving castles. It takes a lot of money to conserve them, but you only need to restore them once," he told IrishCentral.

He said that ancient ruins are never safe until they have a roof and added that he would restore McDermott's Castle as soon as possible if he had the money.

He is set to launch a Historic Estate Investment Trust (HEIT) on January 1, next year, to help fund the restoration of McDermott's Castle and other castles in danger of collapsing throughout Ireland.

He said that the concept was similar to a Real Estate Investment Trust except that he is only interested in "like-minded individuals or companies who want to be a part of Ireland's history".

Simon described castles as finite resources and said that there was no way to replace a castle once it falls down.

"All these buildings are finite and every year bits of them fall them. Time is against us if we're to do anything about this.

"You can't build a new one because people would roar laughing at you. They're only as good as their history."

As a result, Simon is seeking like-minded individuals to invest in his HEIT and prevent as many ancient buildings as possible from crumbling to the ground.

He said that anyone investing in the trust must do so for the right reasons and he insists that there is nothing worse than a castle or ancient building falling into the wrong hands.

"A building can fall into the wrong hands. Even after they're restored, these buildings need to be in the hands of protectors.

"You can't have a scenario where someone gets a notion and puts a glass door on a castle. I've seen that done and it's a horror story."

However, Simon is keen to point out that the trust is not a philanthropic venture and says that anyone who invests will "get something out of it".

As an example, he pointed to Cloontykilla Castle, which will be rented out for between €25,000 and €45,000 per week when it is ready to open next year. 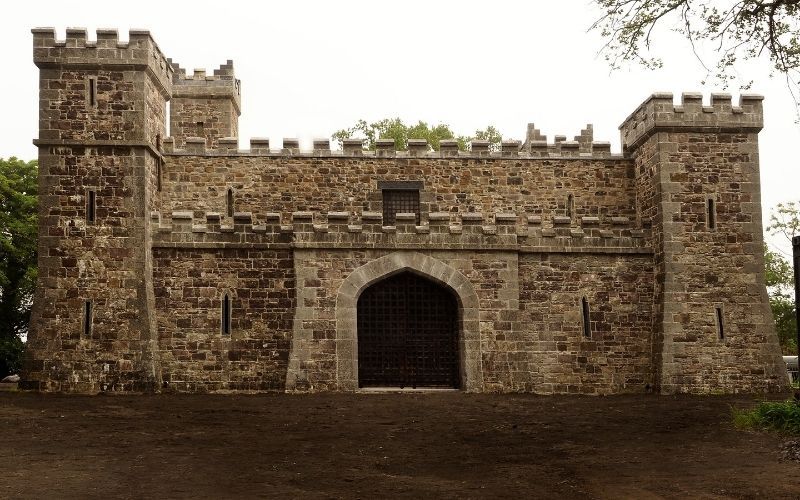 He said that investors will be like shareholders and will receive a dividend once the castle they invested in is restored and making money.

"Anyone who invests will be part of a trust, meaning that they won't be saddled with the complete restoration of a castle.

"It'll be like a society of like-minded people who can enjoy their investment and when the place is bringing in money, they get a return."

Simon has pumped more than €1.5 million into the restoration of Cloontykilla Castle along with another investor, Ken Peterson, who has also invested €1.5 million on the project.

He is currently looking for a third investor to help acquire specialized furniture and fittings to give the interior of the castle an authentic feel, which could cost more than €1 million.

However, he believes that the investment is worth it because it allows people to feel a part of an ancient castle and say that they helped save it.

The trust "can't compete with real estate investment or Bitcoin", he said, but investors will get something back due to the huge demand for castles as luxury holiday homes.

He plans to live in Cloontykilla for several weeks each year when it is not being rented out and said that investors will be able to do likewise with future projects.

His attention will turn to the restoration of McDermott's Castle on Castle Island once he has opened Cloontykilla Castle and secured enough investment through the HEIT.

Located in the middle of Lough Key, McDermott's Castle holds more than 800 years of Irish history and is one of the most significant historical sites in Ireland.

The castle has witnessed warcraft and witchcraft throughout its history, with the famous Battle of the Curlews taking place on the shores of Lough Key in 1599 during the Nine Years' war when the McDermotts joined forces with Red Hugh O'Donnell and Hugh O'Neill to defeat a full-blown Elizabethan Army. While O'Donnell's army is closely associated with the battle, the annals of Irish history attributed the victory to McDermott's army of Moylurg.

The Gaelic clans were eventually defeated by an even stronger Elizabethan Army at the Battle of Kinsale in 1601 and the castle was subsequently confiscated from the McDermotts as punishment.

The castle fell into disrepair soon after the McDermotts vacated and remained in a perilous condition until 1810 when John Nash was commissioned to redevelop the historic building as a summer home.

Nash demilitarized the castle by lowering its original west bawn and opening windows in the building, but he incorporated the 15th-century McDermott tower into the structure. 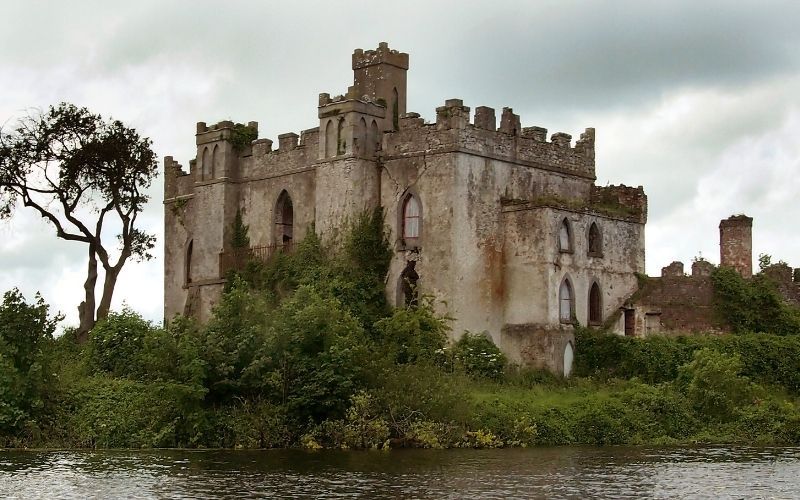 Irish poet WB Yeats sought to acquire the castle in 1890 and transform it into a Castle for the Heroes to cater to those who dedicated their lives to Ireland.

Yeats, however, was unable to secure the funds to buy the castle and the dream died.

The castle was subsequently burned down during the Second World War.

Simon is now aiming to succeed where Yeats failed and restore the historic castle to its former glory.

He has gained invaluable expertise over the past 25 years and plans to find people with a similar love of ancient Ireland to help him save the castle for good before moving on to other projects around the country.

For now, though, he will continue to wage a war against the thick ivy that stubbornly creeps back across the castle's face every year.