Search underway after man reportedly falls from Cliffs of Moher

The alarm was raised at the Cliffs of Moher in Co Clare on Sunday afternoon after bystanders reported seeing a man falling from the 700-foot high cliffs. 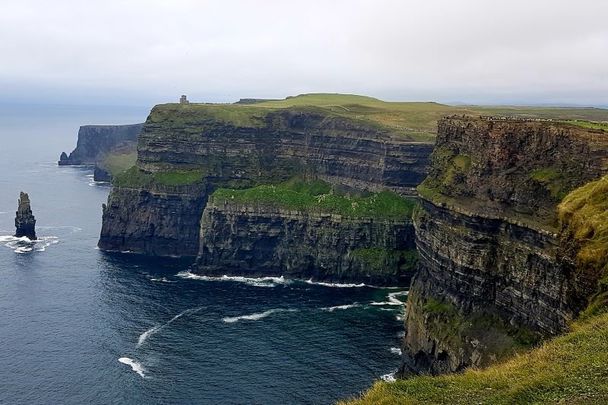 The Cliffs of Moher in Co Clare. Getty Images

An extensive multi-agency search is underway after a man reportedly fell from the Cliffs of Moher on Sunday afternoon.

The search includes the Shannon-based Irish Coast Guard helicopter Rescue 115, the national ambulance service, and the Aran Islands RNLI lifeboat and got underway after the alarm was raised just after 3 p.m. on Sunday.

The search was coordinated by watch officers at the Irish Coast Guard’s marine rescue sub-center on Valentia Island in Kerry.

Sunday's search was stood down after 90 minutes with conditions deemed unsafe to carry out a recovery operation.

The Aran Islands lifeboat was stood down shortly after arriving on the scene and sent back to base, while the Rescue 115 helicopter was retasked to another incident on Inis Mór in the Aran Islands.

The search is expected to resume on Monday afternoon, with members of the Garda Water Unit expected to form part of the recovery operation.

Members of the Doolin unit of the Irish Coast Guard, which was stood down after a raft of shock resignations last November, are also involved in efforts to locate the casualty.

Members of the Doolin unit conducted a cliff-top search on Sunday afternoon in an attempt to locate the casualty at the base of the 700-foot cliffs.

All members of the Doolin unit had their membership terminated last month, but the Department of Transport temporarily reconstituted the service, with a small team of members requested to make themselves available to calls.

The Doolin Coast Guard, one of Ireland's busiest and most experienced coast guard units, was stood down after six volunteers resigned in November over growing tensions within the organization.

Tensions had been growing within the Doolin Coast Guard for several years following the death of volunteer Caitríona Lucas while searching for a missing man in Kilkee in 2016.

A Marine Casualty Investigation Board report into her death was critical of safety management within the unit, while the Irish Coast Guard's response to the report is believed to have resulted in growing tensions.

The Irish Times reports that there have been various allegations of poor treatment of volunteers and overly cautious management within the unit.