Body recovered from the Cliffs of Moher after two-day search

The body of a man in his 20s, understood to be from Co Galway, was recovered on Wednesday evening at the Cliffs of Moher after he was seen falling on Tuesday afternoon. 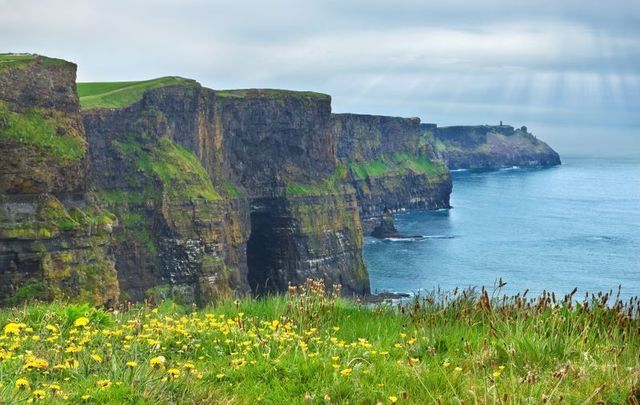 A body, believed to a male in his 20s from Co Galway, was recovered on Wednesday from the base of the Cliffs of Moher. Getty Images

A body was recovered from the base of the Cliffs of Moher on Wednesday following a search that had begun the day prior. The body is reported to be of a man in his 20s, understood to be from Co Galway.

Read More: Tourist rescued after falling onto narrow ledge at Cliffs of Moher

ClareFM reports that a search began on Tuesday afternoon by the Irish Coast Guard based in nearby Doolin after local gardai received reports of a man falling some 600 feet from the Cliffs.

The Irish Mirror reports that a number of tourists reportedly saw the man fall. The tourist’s coach driver used binoculars to track the body in the sea while emergency services were alerted.

A helicopter from the Shannon-based Irish Coast Guard was diverted from another call to assist in the search.

The man was not located on Tuesday, but his personal belongings were recovered from the water. The search was shut down on Tuesday evening before resuming around noon on Wednesday.

ClareFM reports that on Wednesday, the man’s body was spotted on rocks at the base of the Cliffs, about 500 meters from the visitor center. Coast Guard personnel subsequently launched two rescue boats from Doolin, while Rescue 115 was also dispatched to the scene.

The nearly hour-long operation recovered the man’s body before transporting it back to the Coast Guard base in Doolin. There, the man was formally pronounced dead before being transported by hearse to University Hospital Limerick where both formal identification and post-mortem will be carried out.

A Garda spokesman confirmed they are treating the death as a ‘personal tragedy’ and that an investigation will be carried out in order to prepare a file for the county coroner.

The same day the man’s body was recovered, The Cliffs of Moher announced that they would be closed the following day, October 3, from 3 pm to impending Storm Lorenzo:

We are closed to-morrow 3rd October from 3pm due to hurricane Lorenzo, please do not visit after 3pm, conditions will be extremely dangerous