Grammy-winner Renee Fleming performed the Irish ballad about a father’s love for his son at the end of the funeral ceremony at Washington National Cathedral. 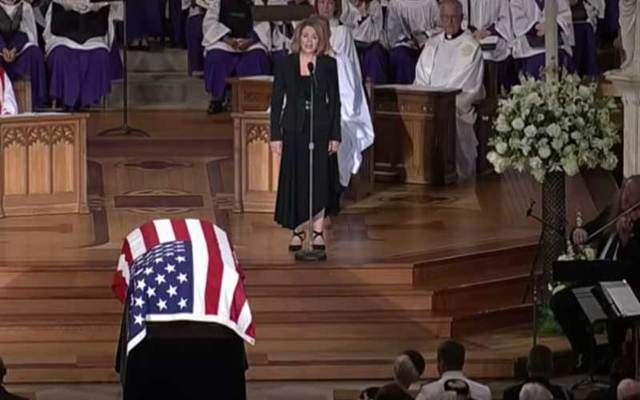 John McCain’s widow teared up and rested her head on her son JImmy’s shoulder as he put a comforting arm around her.

Grammy-winner  Fleming performed the air about a father’s love for his son at the end of the funeral ceremony at Washington National Cathedral.

The funeral service featured strong words from Meghan McCain and President Obama clearly directed at the occupant of the White House.

As New Yorker Magazine noted: “Donald Trump’s name was never mentioned. It didn’t have to be. The funeral service for John Sidney McCain III, at the Washington National Cathedral, on this swampy Saturday morning, was all about a rebuke to the pointedly uninvited current President of the United States, which was exactly how McCain had planned it.”

Read more: What are the words of “Danny Boy”?