Co Down star Ciara Mageean ran to an Irish record-setting victory during the women's 1500m event at the Diamond League in Brussels. 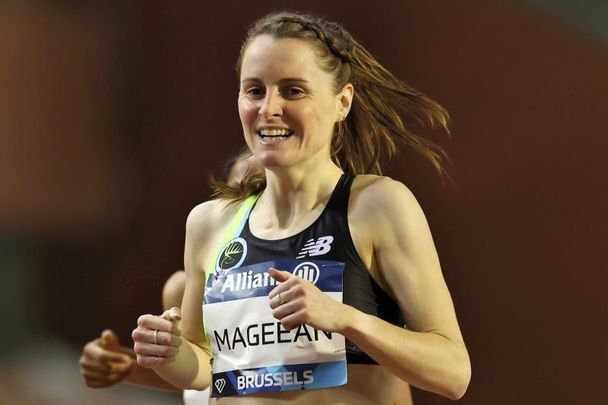 Irish track legend Sonia O’Sullivan was one of the first to congratulate Ciara Mageean as the star from the County Down smashed O'Sullivan's 27-year-old 1500 meters Irish record with victory at the Diamond League Meet in Brussels, Belgium on Friday, September 2.

Mageean, a European and Commonwealth Games medalist, lowered her own personal best by over three seconds and beat O’Sullivan’s 1995 mark by over two seconds as she landed a 3:56.63 time in Belgium.

And a Diamond League win.

“I’m absolutely over the moon,” Mageean told RTE Radio on Saturday morning. “I knew I could go sub four for sure, which is always a huge achievement, and I knew that I’d have it in me to run a national record.

“So to go 3:56-mid was just breathtaking, it was out of this world. Crossing the line, I didn’t even see the time, I think I asked Laura Muir, ‘What time did I run?’ so it was obviously brilliant.

“The 1995 record is something that’s been in my sights, and it was so lovely to share that moment with Sonia O’Sullivan. I had a good chat with her in the cooldown area afterwards.

“Sonia is a huge idol of mine and a huge inspiration in athletics, so it was kind of a handing over of the baton.”

Congratultions @ciaramageean winning Brussels Diamond league 1500m and new Irish record old record nearly as old as Ciara is young . Great to be in the stand to witness such a great race by Ciara who has had a great season and was not afraid to lose tonight @Diamond_League pic.twitter.com/v5zFhuwNMh

Mageean also revealed how she almost missed the big race in Brussels. She added, “Truth be told, it was a battle to get into that race. On Thursday, I wasn’t on the start list, I was called up fairly late to the race.

“I know that my agent Ricky Simms was working hard to get me on the line and was trying to convince the meet race director saying, ‘You have to give her a chance, she’s in good shape.’

“He thought it would have been a definite after winning two major medals over the summer but because they were not super-fast times, I was put on the substitutes’ list, I was still on the bench, I wasn’t making the starting panel.

“So I’m super glad that I got the call up and got that opportunity, as I did a blistering session in the week leading into it and I knew that I was in good shape.

With the Diamond League in Zurich on Thursday night, Mageean is ready to carry on with her current blistering form.

“I know I’m in the shape of my life and I just want to go out and show the world what I can do, so this will certainly open some more doors, but it also gives me more belief,” she said.

“Going from a four-minute runner to a 3:56 runner, that’s making me competitive on the world stage and it’s something that I’ve always known, but it’s one thing having confidence in yourself and it’s another thing having the facts there to back it.

“So not only does it show the world what I can do but it also proves it to myself, so hopefully it will help me take a huge step forward. If I go into Zurich feeling the way I felt in Brussels, I’ll be up there, but it’s never easy as these girls are competing at this level week-in week-out, so hopefully, I’ll be able to raise my game again and be up there and be competitive.

“I feel very proud to be able to get the Tricolor flying at that level again, because there were so many Irish in the crowd who I have to say a big thank you to as I could hear them whenever I walked out. Hopefully, there will be more occasions like that.”