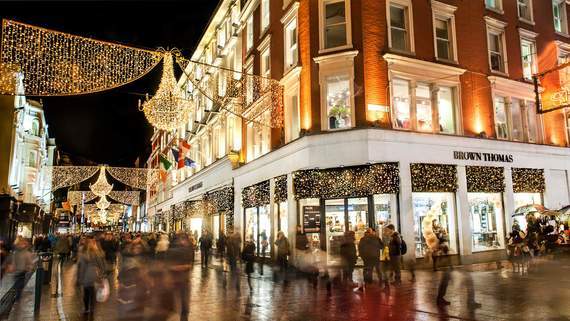 Christmas lights may be a victim of Ireland's ongoing energy crisis, with local authorities across Ireland set to reassess every measure of energy usage ahead of the winter months.

Ryan said he would not insist on local authorities restricting festivities and light displays this Christmas but added that each authority will have to reassess their energy usage and consider every measure that could help ease the crisis.

"I think local authorities are starting to look at that. They are starting to consider every measure but we’re not being prescriptive down to that level yet," Ryan said ahead of the meeting with Varadkar and Martin.

Speaking on RTÉ's Prime Time on Tuesday night, Ryan said he could not guarantee that there would be no blackouts over the winter.

He said a number of different factors will determine energy supply, including the performance of an old fossil fuel plant that wasn't available when needed in previous years.

"I think the blackouts will depend, more than anything else, on the availability of that fossil fuel plant, where we’ve had difficulties. But one of the ways to avoid that is being clever in reducing our use. And that will, not only, give us security benefits, it will also help cut the bills," Ryan told Prime Time.

Ryan added that the Government's Reduce Your Use campaign sets out a number of different ways that households can save power over the winter months.

However, he said the Government encouraged people to "stay warm", adding that people should be "clever" with their energy usage.

He said schools, libraries, and other essential public facilities will be protected over winter.

"Children benefit from being in school… we need our children in school," he told Prime Time.

He said keeping libraries warm and busy over the winter is "exactly" what the Irish Government should be doing, adding that many peoples use libraries as a social hub and a place to stay warm.

"When it comes to libraries, don’t shut facilities that actually provide a really important social function in the middle of difficult times.

Ryan announced on Wednesday that households will receive another energy credit before Christmas to help cover the mounting cost of energy bills. The Government had previously announced a €200 reduction in energy bills earlier in the year.