The Irish Blessing, which was recorded by congregations in every county in Ireland, features a rendition of "Be Thou My Vision." 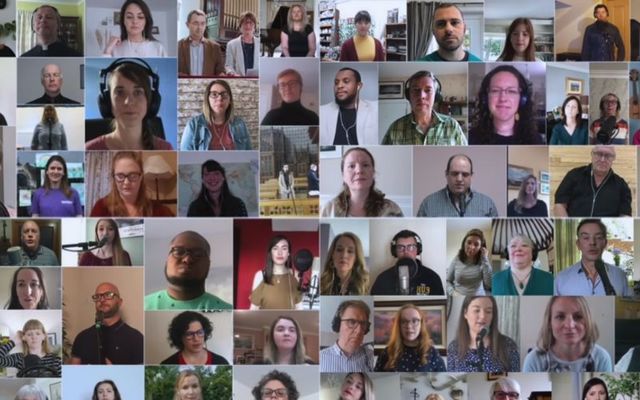 Over 300 Christian groups in Ireland have come together to record an ancient religious hymn as a blessing for frontline workers during the COVID-19 pandemic.

The Irish Blessing, which was recorded by congregations in every county in Ireland, features a rendition of "Be Thou My Vision" - a prayer of protection that dates back over one thousand years.

The collaborative effort was filmed remotely by members of various religious denominations in Ireland and then edited together into one six-minute-long video.

The initiative is part of a global Christian movement that began in the United States where congregations and religious groups come together to bless frontline workers.

The Irish Blessing seeks to simultaneously protect Irish frontline workers and also honor the unique history and culture of Ireland. The video, which premiered on YouTube at the end of May, thus features beautiful drone footage of Ireland that shows off the country's breathtaking landscapes.

Philip McKinley, an ordinand with the Church of Ireland, organized the event and said that the variety of participating congregations highlighted the "enormous range" of Christianity in Ireland.

He told RTÉ News that the recording provides a "snapshot" of Christianity in Ireland in 2020 and said that the groups range from Catholic churches to independent evangelical churches.

Monks from Glenstal Abbey, orthodox churches, and migrant-led churches all additionally feature on the recording.

"We have got 300 churches together - from the north, south, east and west - representing every county on the island - and we have sung together collectively this ancient 1000-year-old hymn and prayer of protection for Ireland at this time," McKinley told RTÉ News.

Proceeds from the blessing will be going to Christian Aid Ireland, Trócaire, and Tearfund Ireland in equal measure. The video has been viewed almost half a million times in less than a week since it aired on YouTube.