Proceeds from the track will be going toward Queen's University in Belfast and other Ulster Universities to pioneer research into COVID-19 recovery and rehabilitation. 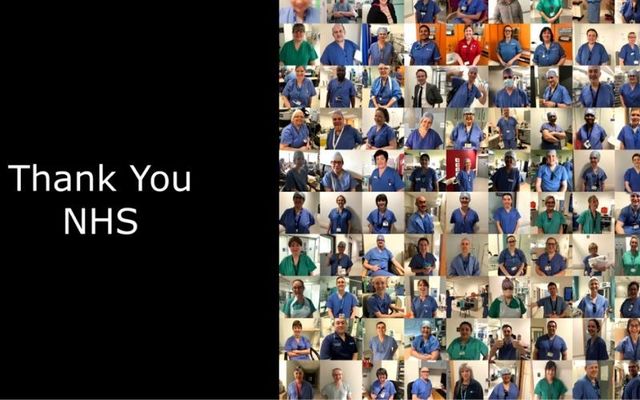 Around 20 prominent Irish and Northern Irish singers have teamed up to record a charity single to support COVID-19 research and "heal a broken land."

Irish Eurovision winner Niamh Kavanagh and Eurovision contestant Brian Kennedy are two of the most high-profile singers to appear on the track, which is a re-recording of Broken Land by Northern Irish band the Adventures.

Proceeds from the track will be going toward Queen's University in Belfast and other Ulster Universities to pioneer research into COVID-19 recovery and rehabilitation.

Professor Judy Bradley and other researchers need more than £50,000 ($61,000) to research what kind of care and support is needed when Coronavirus patients are starting to recover from prolonged stays in intensive care.

The song's video also pays a touching and personal tribute to NHS staff on the frontlines of the fight against COVID-19 and each artist appears next to a picture of a different healthcare worker, offering a heartfelt thanks.

Broken Land was a hit in the UK in the late 1980s for the Adventures and cracked the top 20 of the UK charts in 1988. The song was the most played song on British radio in the same year.

"The word on every street is stay at home, my friend I wish you well," replaces lyrics in the original song, for example, to reflect the current situation.

Pat Gribben, a guitarist with the Adventures who wrote the original song, penned the repurposed version of the song and appeared first in the music video. Adventures lead singer Terry Sharpe and backing vocalist Eileen Gribben also feature in the song.

Niamh Kavanagh, who won the Eurovision Song Contest in 1993 with "In Your Eyes", appears in the song's chorus, while Brian Kennedy, who represented Ireland in 2006, appears at the beginning of the second verse.

Other prominent artists to feature in the song are Duke Special, who scored a hit with "Freewheel" in Ireland in 2007, and Peter Corry, who has consistently performed on London's West End. Popular country musicians Cliona Hagan and Derek Ryan also feature on the charity single.

All artist recorded their parts from their own homes and the performances were mixed by Cormac O'Kane of Redbox Recording in Belfast.

To find out more about the project, or to donate to Professor Judy Bradley's research, click here.