Mudered Dublin twins (8) remembered on their birthday, All Saint’s Day

The family of murdered twins Chelsea and Christy Cawley gathered at their graveside on Wednesday to pay an emotional tribute on what would have been their 9th birthday. 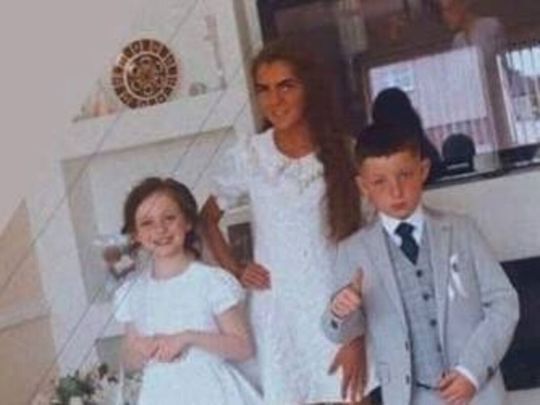 Lisa Cash, 18, with Chelsea and Christy Cawley, 8. Family's Own

The family of murdered twins Chelsea and Christy Cawley gathered at their graveside on Wednesday to pay an emotional tribute on what would have been their 9th birthday.

Chelsea and Christy were killed in their Tallaght home on September 4 along with their older sister Lisa Cash, 18. Their older brother Andy Cash, 24, was later charged with all three murders.

On November 2, which would have been Chelsea and Christy's 9th birthday, close family members and friends gathered at their gravesides in Bohernabreena Cemetery, adorning their graves with pink and blue balloons.

Family and friends sang "Happy Birthday" and released blue and pink balloons into the air.

They also placed a special birthday cake in front of the twins' graves and let off a firework sprinkler.

Fr. Paul O'Driscoll, the parish priest of the Travelling People, also offered graveside prayers during the gathering on Wednesday.

At Chelsea and Christy's home in Tallaght, the front gate was adorned with balloons and teddy bears to further mark their 9th birthday.

Their cousin Nina Cawley also shared an emotional tribute to Chelsea, Christy, and their older sister Lisa in a heartbreaking Facebook post on Wednesday.

"Christy and Chelsa. Today is All Saints Day. Use (sic) are 9 today. Life is so unfair that it has to be like this. You will be forever loved and missed. Forever in our hearts. Lisa, Christy, Chelsey, Our 3 angels," Nina Cawley wrote on Facebook.

Lisa Cash (18) and Christy and Chelsea Cawley (8) were found stabbed to death at their home on Rossfield Avenue in Tallaght, south Dublin on Sunday, September 4. 2022 A fourth sibling, Mikey, was also injured but managed to raise the alarm. The children's mother, Margaret (41) also survived the attack.

Andy Cash (24) the children's brother was arrested a short time after the attack. He faces three murder charges amount other crimes.