Chaotic scenes at Dublin Airport as 1,000 passengers miss their flights

Dublin Airport Authority said it had "let the nation down" following chaotic scenes at Dublin Airport, with customers faced with significant queues for airline check-in, bag drop, and security screening. 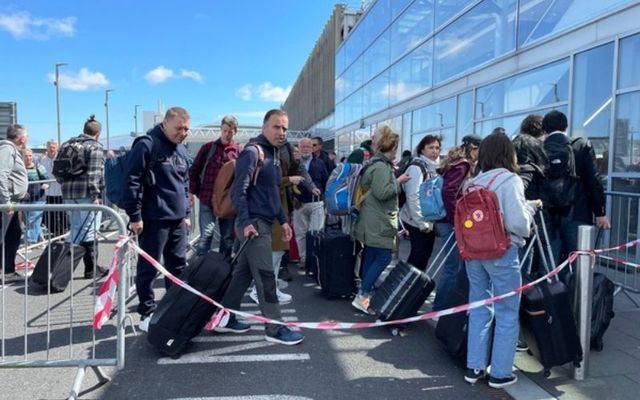 The Dublin Airport Authority has apologized after roughly 1,000 passengers missed their flights on Sunday afternoon.

The DAA said it had "let the nation down" following chaotic scenes at Dublin Airport, with customers faced with significant queues for airline check-in, bag drop, and security screening.

Minister for Transport Eamon Ryan and Minister of State for International Transport Hildegarde Naughton have expressed their "deep unhappiness" about the lengthy waiting times at the airport, adding that the airport was "falling far short" of the service people expected.

Ryan and Naughton said it was "not satisfactory" that people were arriving at the airport on time but still missing their flights.

DAA spokesperson Kevin Cullinane told RTÉ's Morning Ireland that there is a "much more controlled situation" at the airport on Monday morning, but passengers have expressed fears that the same problems could resurface at the weekend.

A Kerry couple who missed their flight to Naples on Sunday morning despite arriving several hours early told RTÉ News that they "definitely won't fly from Dublin Airport ever again".

Jerry Daly and his partner Rose arrived at the airport at 4:45 a.m. ahead of their 7:45 a.m. flight to Naples but only arrived at the departure gate at 7:40 a.m. and were prevented from boarding the plane.

Daly told RTÉ that he counted a total of 36 "distressed" passengers who had also been prevented from boarding the flight.

"We pleaded with the person at the gate to let us in and then I gave one look out the window and see them removing the cases off the plane," Daly told RTÉ.

Daly added that they queued for another five hours to try and arrange another flight to Naples, only to be told that no more flights were available.

The couple were embarking on their first trip abroad since the outbreak of the Covid-19 pandemic.

"It’s a terrible bad advertisement for Ireland. I see a lot of people of different nationalities getting distressed and cross. It doesn’t look good," Daly told RTÉ.