"Ceasefire," the story of the 1994 IRA cessation which signaled the end of The Troubles, is set to be directed by Oscar-winner Terry George. 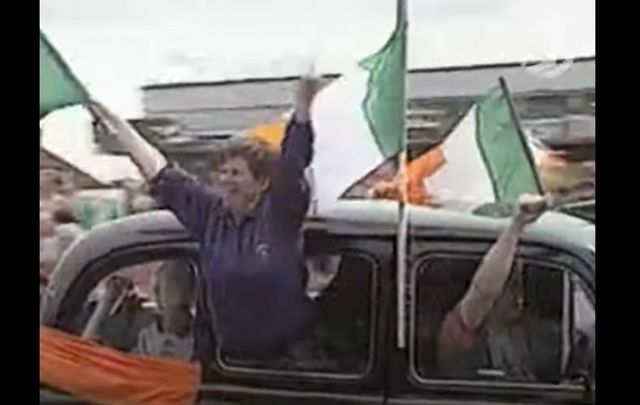 The IRA's ceasefire in 1994 was met with celebrations in Belfast. Sinn Féin, YouTube

Oscar-winning director Terry George is set to direct "Ceasefire," the gripping story of the US role in the 1994 IRA ceasefire.

Variety has exclusively reported that a new series on the US role behind the famous 1994 IRA ceasefire will be made by Oscar-winning director and Belfast native Terry George.

Three of George's films have focused on events during The Troubles - "Some Mother's Son," "In the Name of the Father," and "The Boxer."

In 2019, George was hesitant to hint at the "Ceasefire" project when talking with BBC: "I'm always loath to say things because you never know whether it will get made or not, but I'm developing a TV series about the build-up to the first IRA ceasefire.

25 years ago today, this is how many people in Belfast heard the news of the IRA ceasefire. No smart phones in those days. No wifi.
No Twitter. @vincekearney and I were in our 20s. The @BelTel was an evening newspaper.
So much has changed.
Just not enough. pic.twitter.com/p2uMPBf0Om

Variety now reports: "'Ceasefire' is to depict the dynamics and diplomacy that facilitated the historic Good Friday peace agreement of April 1998, which helped transform Northern Ireland after decades of bitter conflict, in hopes that it can help similar political situations."

The idea for "Ceasefire" comes after a 2018 Washington Post profile of Niall O'Dowd, the founder of IrishCentral who played a leading role as intermediary between US President Bill Clinton and the Irish Republican movement.

The forthcoming series is being produced by Eric Esrailian, who recently received a medal from Pope Francis for his philanthropic activity around awareness of the Armenian Genocide.

Esrailian told Variety: "You look at the events around the world and you say: ‘Where has there been a successful brokering of peace between two hostile opposing forces?'

“If you read more about the ceasefire between Loyalists and republicans in Northern Ireland you see how the tension goes back literally hundreds of years,” he added.

“You can’t find two groups of people more bitterly opposed to one another, yet a ceasefire was successfully accomplished,” Esrailian noted. “I think that’s a fascinating subject matter; it’s relevant and timely.”

The “Ceasefire” series is being shopped around and “there is a lot of interest,” Esrailian said.