The lucky mog got away with all its lives still intact. 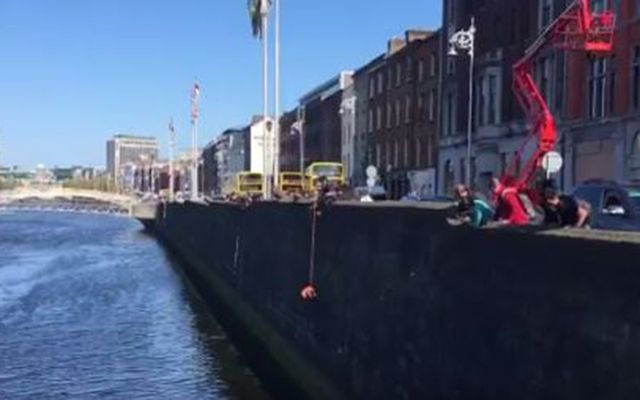 Two passersby save a cat from Dublin's River Liffey. @1916WalkingTour/Twitter

A cat was rescued from Dublin’s River Liffey after a passerby spotted its panicked splashes.

Tour guide Lorcan Collins was leading a group of tourists over Grattan’s Bridge to Dublin Castle when he spotted the commotion. He added he was worried sick the poor animal was going to drown but quick thinking by a passerby saw a lifebuoy thrown into rescue it.

Cat just rescued from the Liffey in dublin #8Lives pic.twitter.com/dAxtZnivYY

“It fell into the Liffey on the other side and swam over across the river,” he told The Irish Times. “It was in there for at least twenty minutes. For a brief moment it looked like he was going to go down. I really thought he was going to drown.”

“Then a brave guy, he was from Asia, jumped up and threw the buoy into the river. He was dangling his legs over the side, it was very brave. They were pretty quick thinking.It was a very fine example of humans coming together in a positive manner. He pulled him out and there was a palpable sense of relief.”

The two rescuers were from Asia and South America and managed to conduct the operation in the midst of heckling from the gathering crowd.

Read more: Dublin dog tries to protect its fallen friend after a hit and run (VIDEO)

“In a uniquely Dublin way several of the local young lads were on the sidelines shouting useless, colourful advice to the pair pulling it up.”

Collins has been running a 1916 Walking Tour of central Dublin for 21 years but told IrishCentral that, “that was one of the coolest events I've seen.”

“However there have been some other exciting events in the streets - we saw the fire brigade rescuing a man in the Liffey once. I've seen a good few seals in the Liffey. Also witnessed a few car crashes over the years - nothing too serious though. But yeah, cat being pulled up by a lifebuoy was the top so far.”