Cara Darmody, 12, had the sweetest reaction to learning she passed the Junior Cert exam when her results were revealed on RTÉ's The Late Late Show. 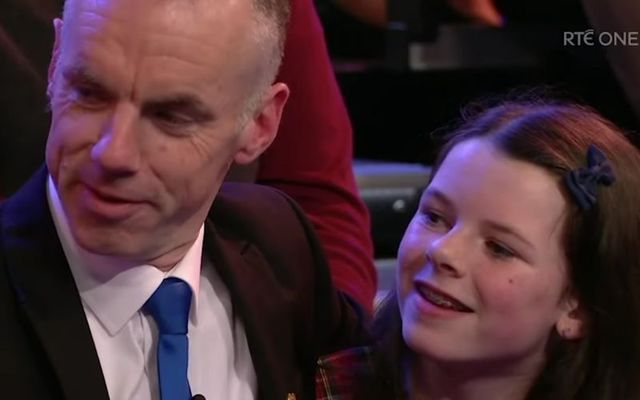 Cara Darmody, who sat the Junior Certificate maths exam when she was just 11 years old, learned she received a whopping 97% in the exam on Friday's episode of RTÉ's The Late Late Show.

Darmody, whose two younger brothers Neil, 10, and John, 5, are non-verbal with autism, sat the Junior Certificate maths paper to raise awareness about the lack of services afforded to children with special needs. The Junior Certificate is usually sat by students aged 14 or 15.

The 12-year-old thought she was appearing on The Late Late Show to talk about her ongoing campaign to raise funds for better autism services in Ireland.

However, she received a surprise when she was presented with her results live on air, two weeks before the results are released to students around the country.

Earlier in the show, Darmody told host Ryan Tubridy that she would be happy to get 50% in the exam.

She later shouted in delight when her principal Brid Quinlivan read out her results.

"I never thought in a million years that I would get 97%. I am so happy because I can now keep helping those 18,000 children," Darmody told Tubridy during Friday's show.

Darmody studied an extra 400 hours as a fifth-class student at Ardfinnan National School in Co Tipperary so that she could set the Junior Cert maths exam last June.

Her campaign helped to raise €40,000 for her local school, the Scoil Chormaic Special School, Family Carers Ireland, and the autism charity AsIAm.

Last week, Darmody addressed an Oireachtas committee on the subject of autism services in Ireland, becoming the youngest-ever person to address TDs in the Dáil.

She also met with Taoiseach Micheál Martin last July and asked him to address the shortage of services for autistic children.

She has now announced that she intends to sit the ordinary level Leaving Cert maths exam next June to raise more funds and "help more people".