The Historical Enquiries Team said in 2013 that Joe McCann's actions "did not amount to the level of specific threat which could have justified the soldiers opening fire." 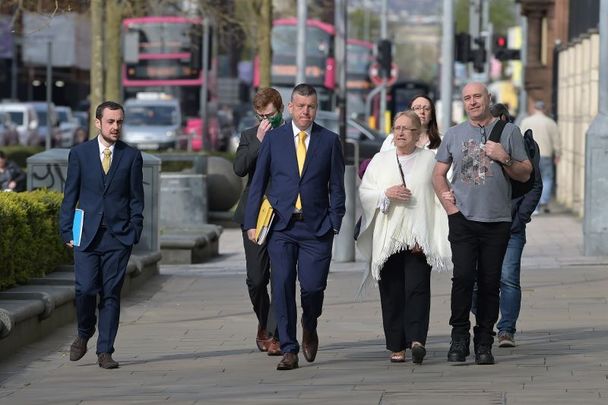 Two former British paratroopers, known as Soldiers A and C, are in Belfast Crown Court this week accused of murdering Official IRA commander Joe McCann in Belfast during The Troubles.

McCann, a 24-year-old father of four, was shot by British soldiers as he fled a checkpoint after a scuffle with a Royal Ulster Constabulary (RUC) police officer in the nationalist Markets area of Belfast on April 15, 1972.

The Belfast court heard on Tuesday that as he lay dying on the street, McCann, who at the time of his death was on the RUC's most wanted list, told the soldiers: “You got me cold, I’ve no weapon.”

McCann’s death triggered days of riots in Belfast, and his funeral was attended by thousands of people.

The RUC investigation conducted in 1972 after McCann’s death did not, based on the evidence available, move to prosecute anyone.

In January 2013, the now-defunct Historical Enquiries Team, a special branch of the PSNI that investigated the unsolved murders that occurred during The Troubles, found that “Joe’s actions did not amount to the level of specific threat which could have justified the soldiers opening fire in accordance with the Army Rules of Engagement or their standard operating procedures.”

One of McCann’s family members said during a press briefing upon the publication of the HET report in 2013: “Policeman B, as he is referred to in the HET report, claims to have stopped Joe at the corner of Little May St and Joy St, to have identified himself as a police officer and to have then told Joe to take his hands out of his pockets.

“He claims that Joe pushed him away, turned and ran down Joy St. At this point, all three soldiers, A, B, and C opened fire and Joe fell, having been struck by three high-velocity bullets. He was unarmed.”

(Policeman B has never been traced or identified, an issue which was raised by presiding Justice O’Hara in court on Tuesday.)

In 2016, Northern Ireland’s Public Prosecution Service (PPS) announced that it would be prosecuting two men for the offence of murder in relation to McCann’s death in 1972.

The PPS said at the time: “The two defendants in the case are surviving members of the army patrol which shot Mr. McCann. A third member of the patrol who also fired at Mr. McCann died in the intervening years. At present, these individuals are not being named and are identified as Soldier A and Soldier C.

“The decision to prosecute is the outcome of a review which was undertaken after the case was referred to the Director of Public Prosecutions by the Attorney General for Northern Ireland in March 2014. The decision was reached following an objective and impartial application of the Test for Prosecution that was conducted in accordance with the Code for Prosecutors and with the benefit of advice from senior counsel.”

The two British veterans now on trial, both in their 70s, formally entered not guilty pleas on the opening day of the trial in Belfast on Monday, April 26.

Speaking in court on Monday, the Crown lawyer, who has not been publicly named, said: “On any view of the facts, the level of force used was unreasonable.

“Both soldiers shot Mr. McCann in order to stop him from getting away and avoiding being arrested.

“The prosecution case is that in all circumstances that shooting was not legally justified.”

The non-jury trial is expected to last four weeks.