When Brian Mullins died unexpectedly earlier this year, his family decided to send his ashes on an amazing journey so he could "be free." 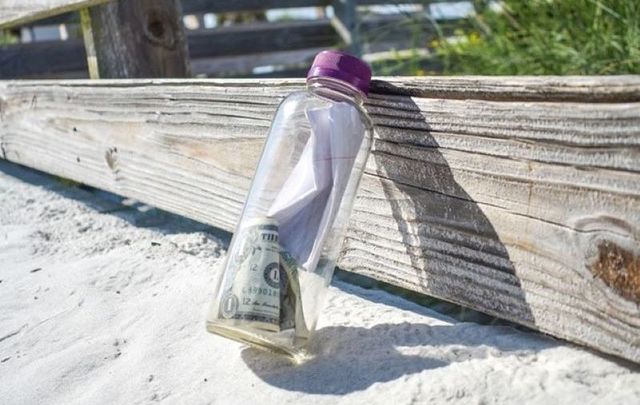 Brian Mullins's ashes a part of a message in a bottle his family launched to give the late man "one last adventure." Walton County Sheriff, Facebook

When Irish American Brian Mullins died unexpectedly earlier this year, his family decided they wanted to send his ashes on “one last adventure.”

“This was just heavy on my heart,” Brian’s mother Darlene told The Walton Sun. “He wanted to travel. He wanted to see the world. So we set him free.”

Darlene and Brian’s daughter Peyton penned a note that they included in a clear plastic bottle along with some of Brian’s ashes and a few dollars before launching the bottle into the Gulf of Mexico from Destin, Florida on August 1.

Darlene’s note read: "This bottle contains the cremation ashes of my son, Brian, who suddenly and unexpectedly passed on March 9, 2019. More than anything, he longed to be free, so I'm sending him on one last adventure. This bottle was launched from Destin, Florida. If you find it, please call or text me and let me know. I have left $4 to cover the call. Feel free to add your own note, then kindly set him free once again. My son was 39 years old at the time of his passing and he was deeply loved. Please keep him traveling. Blessings."

Peyton’s note read: “Hi, my name is Peyton. I am Brian’s daughter. When my father passed, I was 14-years-old. It has struck our whole family pretty hard and, so far, it has been a very hard road. But, like my granny said, he loved to be free. So, that’s exactly what we are doing.”

Amazingly, on August 10, Darlene shared on Facebook that her son’s bottle had washed up in on Walton County Beach, also in Florida, and made its way into the hands of police officer Sergeant Paula Pendleton.

Hello. My name is Sergeant Paula Pendleton. I work for the Walton County Sheriff's Office. I've had a very interesting...

The Walton County Sheriff’s Department shared on Facebook that the bottle was handed to Sergeant Paula Pendleton as 'found property:'

WCSO DEPUTY FINDS MESSAGE IN A BOTTLE “This bottle contains the ashes of my son, Brian, who suddenly and unexpectedly...

Sergeant Pendleton wrote to Darlene and Peyton: “I am putting the note back into the bottle with Brian’s ashes and delivering it to a friend who is a charter boat captain. He has offered to bring Brian way out into the Gulf so he can continue his adventure. But, before that, I want you to know he got to do a ride-a-long with a deputy before drifting out once again.”

Darlene replied to the touching Facebook post: “There are no words to express my deep appreciation to all involved in my son's journey. God's hands were all over this.”

Read More: Mystery of Irishman's message in a bottle found in Alaska 54 years ago finally solved

But that wasn’t all - the police department was able to coordinate a Skype meeting between Sergeant Pendleton and Peyton:

WCSO Sergeant Pendleton speaking with Peyton Mullins, the 14 year old daughter of Brian Mullins, who passed away in March of 2019. A glass bottle with a message and Brian's ashes were found by civilians floating along the waters of a south walton beach. The ashes were given to Pendleton who, by the phone numbers included in the message, contacted Brian's family. Brian was sent out on his new journey today, September 6, into the Gulf of Mexico. Including a note from Pendleton encouraging the next finder of the bottle to continue #BriansJourney. Video by Jenna Bailey

Brian's ashes were released into the water to continue their journey on September 6. In hopes of further keeping track of her late father’s journey, Peyton launched a Facebook group which has since amassed nearly 7,000 members from all around the country.