“Famine and the Crown” beer featuring an image of a malnourished mother and child withdrawn. 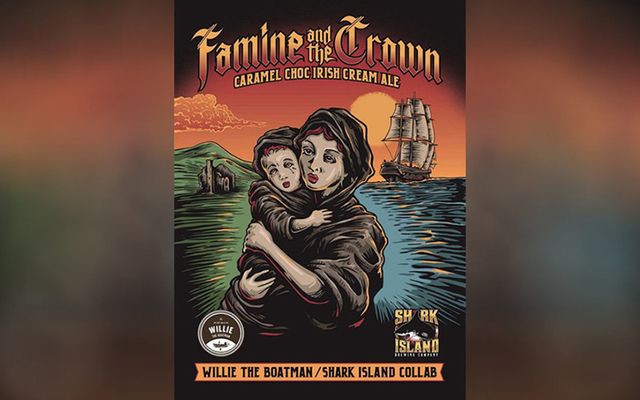 “Famine and the Crown” beer featuring an image of a malnourished mother and child withdrawn. Shark Island Brewing Company/Willie the Boatman

Two Australian breweries have been forced to apologize and withdraw a beer product distastefully named on the theme of the Irish Great Hunger. “Famine and the Crown” was brewed especially for St. Patrick’s Day and bottled with a label featuring the image of a malnourished mother and child alongside the description “caramel choc Irish cream ale”.

A joint project between the Shark Island Brewing Company and craft ale producers Willie the Boatman, the Sydney-based breweries faced immediate backlash over their use of an image of Irish famine victims and were forced to pull the product following a large number of complaints.

In a joint statement, the Australian breweries apologized for the “obvious offense” that was caused by using the theme of the Irish famine in their branding.

The breweries claim that the image and name were in fact inspired by the popular Irish song “Fields of Athenry” which includes the line “against the famine and the crown” when talking about a poor Irishman who was deported to Australia for stealing corn to feed his starving family.

“This truly was not our intention,” the breweries stated when talking about the offense caused.

“When we decided to collaborate on a Saint Patrick’s release we were conscious of not delivering a cliché-Irish themed beer but wished to express something a little more genuine.

“It was never our intention to trivialize this terrible piece of history for the sale of a few kegs, but to acknowledge the resilience of the people.”

Read more: Mocking the Irish Famine on T-shirts is a joke too far

A spokesperson for the Committee for Commemoration of Irish Famine Victims, Michael Blanch welcomed the withdrawal of the product stating: “Anything that educates people on the Great Hunger is to be welcomed, but no-one should attempt to make commercial gain from the suffering of the victims. That’s unacceptable.”

It is believed the beer will now be remarketed under a new design and name.

This is far from the first time a product has invoked something related to the Great Hunger in its branding. Around St. Patrick’s Day, Tshirts can be seen bearing the slogan: “My potatoes bring all the Irish to the yard and they’re like that famine was hard,” a change in lyrics of the popular Kelis song “Milkshake.”

British network Channel 4 also came under fire in 2014 for attempting to produce a sitcom based on the Irish famine story. The proposed famine comedy put forward by Irish writer Hugh Travers is no longer being pursued by the TV channel.