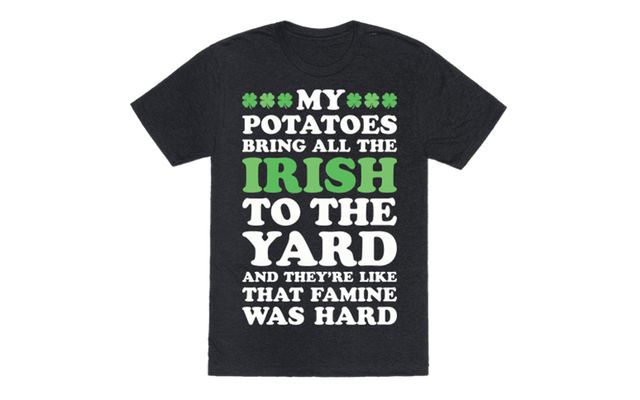 Drinking jokes and tacky green hats are, alas, the fodder of St. Patrick's Day, but poking fun at the Irish Famine crosses a line.

So Look Human’s new clothing line, which emblazons  the meme “My potatoes bring all the Irish to the yard and they're like that famine was hard” onto hoodies, baby grows, tank tops and t-shirts isn’t something I’ll be rushing to buy.

The company even adds an explanatory note. It reads:

“This funny St. Patrick's day shirt features clovers and the phrase "my potatoes bring all the Irish to the yard and they're like that famine was hard" and is perfect for St. Patrick's day celebrations, Irish people, history buffs, people who love funny mashup shirts, potato lovers, getting drunk, and partying in style this St. Patrick's day.”

The words are a variation on the popular 2003 R&B song by Kelis that goes "My milkshake brings all the boys to the yard / And they're like / it's better than yours."

Hardly the fodder for a stupid t-shirt inscription.

The Famine is a different category to drunk jokes and leprechauns. Noted historian Tim Pat Coogan has called it “genocide” because the British did so little to stop it.

Read More: Why the real story of Ireland's Great Hunger is not taught in US schools

There’s a reason why some call it the Irish Holocaust.

I don’t expect us to see flippant t-shirts about the Shoah printed and sold in Israel anytime soon. In the not too distant future those lived experiences will soon be found only in the history books and I hope we will still treat them with the same respect and reverence as when they were found on the tongues of the living.

And if most people would think a t-shirt about the six million Jews killed by Hitler would be in poor taste, I don’t see how one about a million dead Irish people can be considered much of a riot.

The company emailed to tell me the design had led to a “handful of complaints” and that demand for the products has not been “substantial”. So don’t expect to run into many people wearing them at your local St. Patrick’s Day parade.

They also said, “We are disappointed to hear people have taken offense to the design as it is never our intent to offend.”

I recognize it’s fun to sit around and do up silly t-shirts--but the Irish Famine? IS there anything that cannot be trivialized?

Now I understand that it’s not as if the tragedy happened last year, it’s not as if someone has rushed out a t-shirt with a meme about the conflict in Syria and a dust coated child refugee printed on it. No one still alive knew anyone who died in Black ‘47.

But still the Famine is different from most other historical events. The potato crop has been successfully planted and reaped over eight score times since then but the scars from the years it failed will never truly disappear. 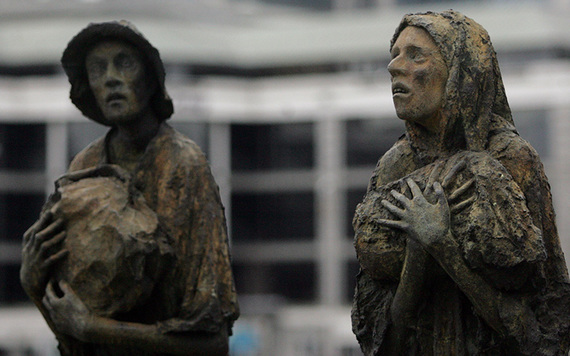 Rowan Gillespie's famous Famine Memorial on the quays of the Liffey, in Dublin.

A million dead, a million fled all within the space of seven years and Ireland’s population has never recovered.

We see the legacy of those years all around us. Such reminders not even hard to find. Children play by Famine Graves to this very day and the surnames of those who fled are borne by people in every state in America.

Even many of those who gambled on escape died. Countless thousands packed themselves onto coffin ships, so jampacked with disease and hunger that 30% of passengers died on the way. There were so many bodies thrown overboard that sharks tailed them across the Atlantic - so confident were they that the ship would provide them with a plentiful and easy supply of meals.

I meet Irish Americans all the time whose families still recall in incredible detail how their ancestors were cast out of their native land by hunger pangs.

One woman from my grandparents' parish in Kerry walked into town looking for a doctor to help her starving family. She didn’t have enough money and was sent home. By the time she got back her children were dead.

For those reasons, I think I’ll pass on Look Human’s clothes.