The Book of Kells will be removed from public display until March to accommodate for conservation works. 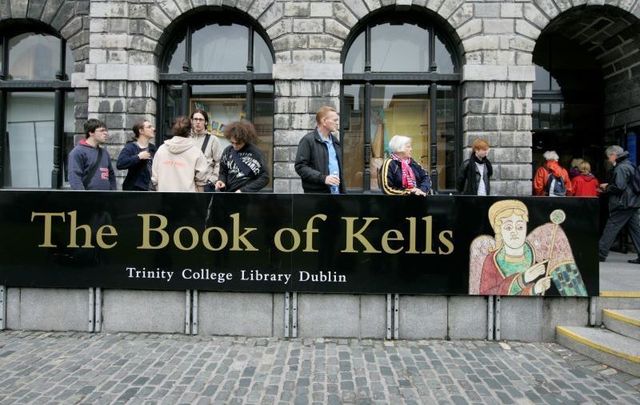 The Book of Kells will be removed from public display until March to accommodate for conservation works. RollingNews.ie

The Book of Kells at Trinity College in Dublin will be removed from public display from November 4, 2019 to early March 2020.

Read More: Book of Kells in Trinity transports history buffs to another world

A statement from Trinity College read: “Housed within the Old Library at Trinity College Dublin, the display area for the precious 9th-century precious manuscript is undergoing necessary works which will require the removal of the Book of Kells during this time. It will return to public display in March 2020.

As part of ongoing conservation plans for the Old Library, the Book of Kells will be removed from display from November 4 to early March 2020. The Exhibition and Long Room remain open to visitors as usual.
Learn more here: https://t.co/g50YywzxlF pic.twitter.com/WDtNGvPe3f

“A full-color replica of the Book of Kells will be available to view in the Trinity’s Long Room library, one of the world’s most beautiful libraries, which houses over 250,000 early printed books and over 20,000 named collections of manuscripts and archives.”

Admission prices will be reduced by 15 percent while the Book of Kells has been removed.

A spokeswoman for Trinity told The Irish Times that the college “purposefully coincided the works with the low season for tourism” to lessen any potential financial impact due to any drop in visitor numbers.

In November 2018, Trinity College welcomed its one-millionth visitor of the year, an American tourist, setting a new record for the tourist site.

In a press statement at the time, Trinity’s Chief Operating Officer Geraldine Ruane said: “We are delighted to welcome our one-millionth visitor to The Book of Kells this year, a key milestone for the exhibition and something which has never been reached previously.

“Funds generated by ticket sales go directly to supporting the University, including the maintenance of its historic campus and most importantly the overall academic mission of teaching and research.”

In the wake of the removal of the Book of Kells, Helen Shenton, Trinity College archivist and librarian, told The Irish Times that she and her colleagues “take our role as stewards of this wonderful national treasure very seriously.”

“We apologize in advance for the temporary inconvenience caused and look forward to reopening the new display of this magnificent national treasure for the visiting public and our community of students and scholars."

Read More: Pity the scholars who toiled over the Book of Kells and other medieval manuscripts

What is The Book of Kells?

Ireland’s most prized artifact, The Book of Kells is an illuminated 680-page version of the four Gospels written in Latin. The 9th-century manuscript was composed by monks on vellum or prepared calfskin. It includes wondrously intricate illustrations that were thought to be made by four artists, while the handwritten transcriptions are believed to have been made by a team of three. 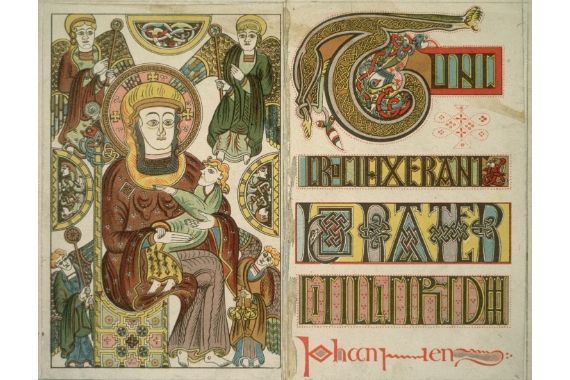 An image from The Book of Kells (Getty Images)

Despite its name, work on The Book of Kells is thought to have begun at a monastery on the remote Scottish island of Iona. A Viking raid in the year 806 forced the monks to flee to a monastery in Kells, Co Meath.

Recent research by Dr. Bernard Meehan suggests that the rather than all at once, the first half and second half of the book were created up to 50 years apart - one in Iona, the other in Kells.

Though undoubtedly stunning overall, the transcription process the writers used in creating the book has been deemed “remarkably careless.” Certain repetitions and omissions, coupled with the stunning artistry, have led researchers to believe that the book was likely created for ceremonial use as opposed to daily use.

It’s important to note that the Book was created when there was a period of high illiteracy. Therefore, the use of colors and images helped convey the messages of the Gospel more accurately to the masses as opposed to just words themselves.

Despite what some critics say is “careless,” 12th-century writer Gerald of Wales said of the artistry in the Book of Kells: “You will make out intricacies, so delicate and so subtle, so full of knots and links, with colors so fresh and vivid, that you might say that all this were the work of an angel, and not of a man."

Have you visited the Book of Kells before? Tell us about it in the comments