Bill Clinton "on the mend" after being hospitalized with blood infection

The 75-year-old is responding well to treatment at the University of California Medical Center in Irvine, California 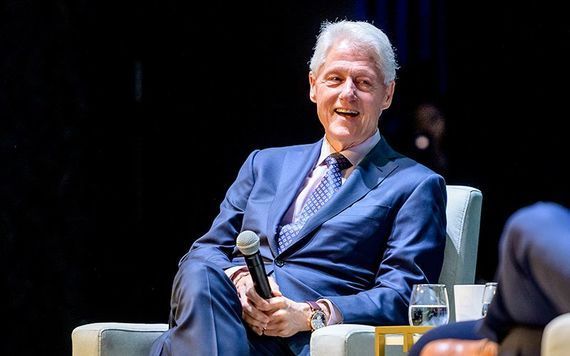 CNN reports that a urinary tract infection has spread into Clinton's bloodstream. Getty

Former US President Bill Clinton has been hospitalized with a blood infection, a spokesperson has confirmed.

The 75-year-old is responding well to treatment at the University of California Medical Center in Irvine, California. The infection is not connected to the coronavirus.

Clinton's spokesman Angel Ureña confirmed that the former President had been hospitalized in a brief statement on Twitter on Thursday night.

"On Tuesday evening, President Clinton was admitted to UCI Medical Center to receive treatment for a non-Covid-related infection," Ureña wrote on Twitter.

Ureña added that Clinton was already beginning to recover from the infection.

"He is on the mend, in good spirits, and is incredibly thankful to the doctors, nurses and staff providing him with excellent care."

Statement, from me, on President Clinton pic.twitter.com/Jbfl4evpcF

"President Clinton was taken to UC Irvine Medical Center and diagnosed with an infection," the statement read.

"He was admitted to the hospital for close monitoring and administered IV (intravenous) antibiotics and fluids.

"He remains at the hospital for continuous monitoring. After two days of treatment, his white blood cell count is trending down and he is responding to antibiotics well."

Clinton's doctors added that they hoped to get the former President "home soon".

CNN reports that Clinton is suffering from a urinary tract infection (UTI) that has spread to his bloodstream.

Sanjay Gupta, CNN's medical correspondent, said that the 42nd President reported feeling fatigued during a visit to California on Tuesday. He was brought to the hospital for testing to rule out heart-related problems and the coronavirus.

Clinton underwent a quadruple bypass in 2004 due to extensive heart disease and underwent stent surgery in 2010 after complaining of chest pains.

The former President became a vegan following his quadruple bypass and has swapped out his notoriously fatty diet for a healthier alternative.