Holy Trinity Catholic Church, where President Biden attends Mass in Washington, DC, says that "Eucharist is too sacred to be made a political issue." 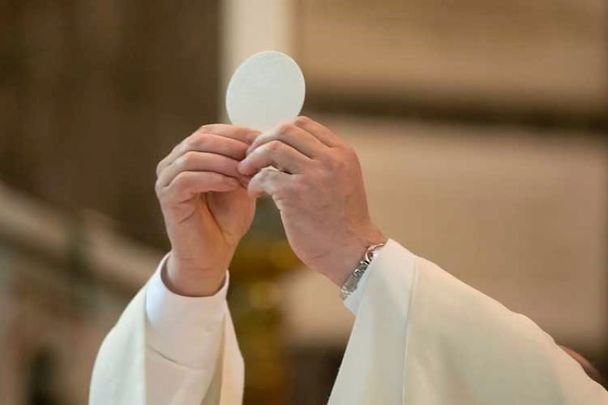 Holy Trinity Catholic Church in Washington, DC, where President Joe Biden, the second Catholic president in US history, attends Mass, has said that it will not deny Eucharist to those who seek it.

The statement from Holy Trinity Catholic Church comes not long after the June 18 decision by the US Conference of Catholic Bishops (USCCB) to move forward with drafting new guidance on the Eucharist.

The action item at the assembly passed with 168 votes in favor, 55 against, and 6 abstentions.

As TIME reports, "many bishops were concerned about the confusion that could be caused among Catholics when prominent politicians support abortion policies and continue to take Communion," TIME magazine reports, according to a church official.

Amongst those prominent politicians is Joe Biden, the second Catholic to serve as President in US history, after President John F. Kennedy. Biden has previously stated that he accepts the Catholic Church's view that life begins at conception but said he refuses "to impose it on equally devout Christians and Muslims and Jews and I just refuse to impose that on others."

He added at the time: "I do not believe that we have a right to tell other people that women can't control their body. It's a decision between them and their doctor, in my view. And the Supreme Court--I'm not going to interfere with that."

In its new statement, Holy Trinity Catholic Church said:  “As the Holy Trinity Parish Council, we stand with our Archbishop, Cardinal Wilton Gregory, concerning the issues surrounding offering the Eucharist to American politicians.

“As a parish which has a long history of welcoming all, we concur with and support the pastoral approach of our Archbishop.

“Holy Trinity Catholic Church will not deny the Eucharist to persons presenting themselves to receive it.

“Cardinal Gregory serves as one of the most prominent ecclesiastical leaders in the current controversy and so it was therefore shocking and disappointing that his request to postpone the draft of portions of this document about the Eucharist received the minority of votes among the bishops.

"As Cardinal Gregory stated in the discussions leading up to the vote, 'The strength of our voice in advancing the mission of Christ has been seriously weakened.'

“Sadly, the recent vote has caused considerable desolation among our parishioners as well as Roman Catholics throughout the nation.

“As Pope Francis recently reaffirmed, communion should be viewed 'not as a prize for the perfect, but as a powerful medicine and nourishment for the weak.' None of us, whether we stand in the pews or behind the altar, is worthy to receive it. The great gift of the Holy Eucharist is too sacred to be made a political issue."

According to the National Catholic Reporter, Biden frequently attended mass at Holy Trinity Catholic Church while he was Vice President in the Obama administration, and has continued to do so as President.

In January, just days after the US presidential inauguration, the Church said it was "honored" to welcome Biden back:

It was an honor to greet and welcome back President Biden to his parish-away-from-home on the first Sunday of his presidency. https://t.co/N51lCKRgdH