A Belfast woman suffering with cystic fibrosis is pleading for a new life-saving drug that is not yet licensed in Europe but is now available in the US. 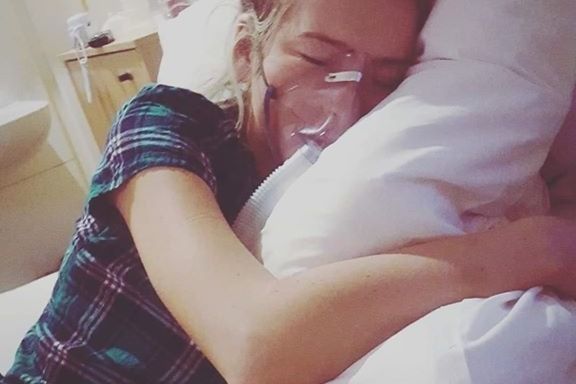 Nicole Adams, of Belfast, suffers from cystic fibrosis and is pleading for a life-saving drug to be approved in the UK. Nicole's Fight to Breath/GoFundMe

A Belfast woman suffering with cystic fibrosis is pleading for a new life-saving drug that is not yet licensed in Europe but is now available in the US.

Nicole Adams, 28, is in the end stages of cystic fibrosis, a genetic disease that kills half of those affected before they reach 40 years of age.

Adams, whose lung function is at only 13 percent and struggles to breath, has described feeling like she is “being suffocated by my own body.”

A new medicine, called Trikafta, can dramatically improve lung function and has been called the “Holy Grail” by cystic fibrosis sufferers. However, the breakthrough pill is not yet licensed in Europe or approved for NHS patients, The Daily Mail reports.

While doctors in the UK may not be able to start prescribing Trikafta until 2021, the drug was made available in the U.S. last October. It will also be available in the Republic of Ireland in a few months, but Northern Ireland, where Adams lives, is under an entirely separate healthcare system.

Adams’ boyfriend Ciaran McVarnock has launched a fundraising campaign to raise the estimated £20,000 it would cost to buy a one-month supply of Trikafta from the U.S. But while while the funds may buy Nicole some time, what she needs is a longer-term solution.

Said McVarnock: “They’re calling Trikafta the wonder drug. It’s saved lives, and we need to get it for Nicole as soon as possible.

"I know it’s a complicated situation, and the care she has received is incredible, but this is life and death for her – it makes me so angry and frustrated that the drug is out there and that she can’t get it.

“We’ve been overwhelmed by the positivity from around the world – we’ve even had cystic fibrosis patients in America offer to send Nicole their Trikafta tablets, saying it’s made them feel so much better they could do without it for a bit, but of course we can’t accept.

“She needs her doctors to give it to her, and she ticks all the boxes to receive it on compassionate grounds. Nicole is a fighter, she is so strong, but I’m worried about how much fight she has left in her. She is trying to stay positive. We all are. But she needs Trikafta now.”

While Trikafta has yet to be approved by the European drug safety body, Vertex, the company that makes the drug, could legally supply it directly to Adams’ medical team under so-called “compassionate use.”

A spokesman for Vertex said: “We cannot comment on specific patients, but take all requests for compassionate use of our medicines very seriously. We are working diligently to assess these requests as quickly as possible once they are received from a patient’s doctor, which is the sole means of initiating this process.”

NHS England and UK prescribing watchdog the National Institute for Health and Care Excellence (NICE) have been trying to work out a financial deal with Vertex for Trikafta.

A source close to the negotiations said: “NHS England have now said they want to do a deal as soon as possible for Trikafta, so the UK doesn’t lag behind other European countries when the drug is approved in early 2020. But NICE have said they’re very busy, and it could take up to a year to assess the drug.

“Many people involved feel this is completely unacceptable, when patients are in such desperate need right now.”

McVarnock said: “She should have had it before now. It’s what she really needs.

“But it’s not just about Nicole, it’s about everyone who comes after her – I’ve seen first-hand what people with cystic fibrosis go through. They need Trikafta now.”

The fundraising drive for Nicole Adams can be found on the Nicole’s Fight to Breath GoFundMe page.