A new outbreak of the virus in Sydney is being blamed on Irish revelers who took part in a wild beach party. 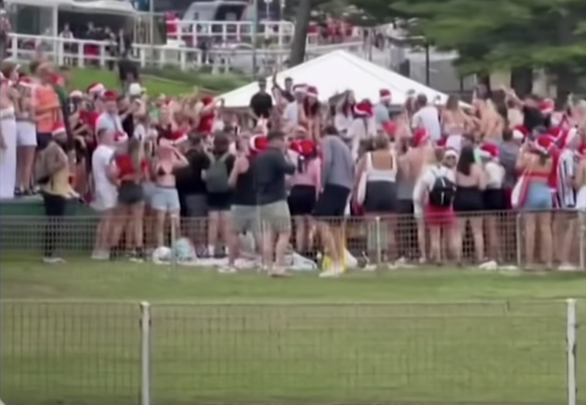 Footage posted to Instagram of the Sydney beach Christmas Party, which flaunted COVID rules, and has sparked a new outbreak. Instagram / @Stucrabb

Australia's Immigration Minister has stated he would be “happy to deport”  Irish backpackers who are being blamed for breaking COVID rules at a mass Christmas Day beach gathering in Sydney. British backpackers were also blamed.

Since the party, a cluster of new cases has been identified in Sydney and local Australian media is blaming a large number of  Irish revelers who were among hundreds who showed up at the tightly packed event.

Cops had to break up the gathering where few wore masks and social distancing was not observed.

Immigration Minister Alex Hawke said he was “shocked” and he said: “The small minority of people who are doing the wrong thing need to understand they are guests in Australia, they are temporary visa holders, and if they breach their visa conditions, they’re subject to visa cancellation.

“Under the migration act, if someone is threatening public safety or health, their visa can be canceled and revoked.

“We don’t want to have public health and safety jeopardized by a small group of people who are not respecting the country that they’ve come to.", we’re very happy to deport people if people are flagrantly disobeying public health orders.

“Sydneysiders would agree 10 months into a pandemic, we all know the drill now, we all understand how difficult this has been around the world, we understand why we have to be doing what we’re doing.

“People who are guests in our country also have to be doing the right thing.”

She said: “Our community has worked hard to keep us COVID free for many weeks.

“This visitor behavior is appalling, disrespectful, and unacceptable, putting us all at risk. Thanks to the riot squad for breaking up this gathering. One person charged.”

Hawke told the Sun Newspaper authorities would be keeping a close eye out for New Year’s Day.

He added: “I’ve instructed the Department of Home Affairs to work closely with NSW authorities in the lead-up to New Year’s Day as well to make sure everyone is doing the right thing and if anyone caught doing the wrong thing, that their visa status is brought before the government.”