Ancient Order of the Hibernians says Irish American columnist for Breibart attempted to justify her own prejudices at the expense of her own heritage. 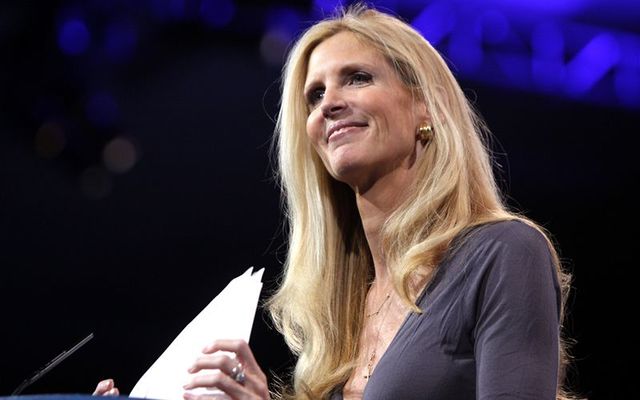 Ancient Order of the Hibernians says Irish American columnist for Breitbart attempted to justify her own prejudices at the expense of her own heritage.

The Ancient Order of Hibernians, (AOH), Irish America’s largest Irish organization has slammed columnist Ann Coulter for a recent article where she called the early Irish crime-ridden and one of the worst ethnic groups to ever set foot in America.

Anti-Defamation Spokesman Neil Cosgrave wrote that Coulter In her recent article “The Irish Aren’t Red Headed Mexicans,” which appeared in Breitbart.com, attempted to justify her own prejudices at the expense of the history and heritage of Irish Americans.

Cosgrave wrote: “According to Ms. Coulter, before the mass immigration of the Irish starting in the mid-19th century, America was a Puritan paradise.  Per Ms. Coulter “Long before America experienced its first immigrant wave in the 19th century, this was already a wildly successful country — rich, literate and free (with one glaring exception, soon to be corrected in the only war ever fought to end slavery). We’d won a war with Great Britain, conquered the West, and invented electricity, refrigeration, suspension bridges and a democratic republic.”

"Before she attempts to school others, Ms. Coulter should do some fact checking. No one, Ms. Coulter, “invented” electricity, it is the flow of charged particles that have been around since the “Big Bang”; Franklin’s genius was in understanding and explaining its nature.  Refrigeration was actually invented by William Cullen of Scotland. The suspension bridge was indeed invented in America, as Ms. Coulter notes, but I wonder if she is aware it was by James Finley, an immigrant from Ireland?

"However, Ms. Coulter’s most egregious distortion is her inaccurate and disingenuous recounting of the New York Draft Riots which she describes as an explosion of Irish “feral violence over the Emancipation Proclamation”.  Conveniently, Ms. Coulter ignores the fact that Irish immigrants served and distinguished themselves in “the only war ever fought to end slavery” to correct Ms. Coulter’s euphemistically labeled “glaring exception” contributing their blood and their lives.

“This was in contradiction to the propaganda of Ms. Coulter’s nativist ideological antecedents (who frequently engaged in their own “feral violence” of burning Catholic churches and convents) that the Irish were incapable of being “loyal Americans.”

Cosgrave says “It was the heroism of the Irish Brigade in helping secure the Union victory at Antietam that gave Lincoln the political opportunity to issue the Emancipation Proclamation in January 1863. The Draft Riots were in July, is Ms. Coulter suggesting that it took seven months for the Irish to break out in “feral violence” in reaction?

Cosgrave wrote about the truth of the Draft Riots stating: “There can be no excuse, no justification for the savagery and horrific acts of the New York Draft Riots and the incidents of racism displayed.

"However, ironically Ms. Coulter repeats the inaccurate, simplistic narrative of the riots usually popularized by progressive academics that the riots had its roots in the “Irishness” of its participants.  The draft riots were, in fact, a revolt against a patently unjust process to fill the depleted ranks of the Union Army. First, the rich could buy an exemption for $300 (far more than a laborer’s yearly wage).

"Second, the quotas established were often politically motivated, unjustifiably higher for poorer immigrant neighborhoods and did not consider the large number of men from those communities who had already enlisted. Finally, it threatened to eliminate recruitment bounty money which many soldier’s families used to sustain themselves while the primary wage earner was serving; to be drafted was for many to condemn their families to poverty.  As the Chicago Tribune of the day noted: “The Draft put the whole sacrifice of life, limb, health, and home upon the poor and laboring classes who have the least at stake in the preservation of the Union.”

"The Irish representation in the New York City Draft riots was not, as Ms. Coulter implies because Irish immigrants were predisposed to “feral violence’, but because the laboring class of New York City was disproportionately Irish.  Contemporary accounts also cited members of other immigrant groups contributing to the reprehensible brutality in the New York riots. In similar riots, in protest to the draft in other cities across the country the ethnicity of the participants reflected the unique demographics of their poor.

"Ms. Coulter should read the summary of the New York City Draft riots published by Harper’s Weekly shortly after the reprehensible events.  Harper’s Weekly was not known as being overly friendly to the Irish; it was the employer of the bigoted Thomas Nast. However, Harper’s Weekly noted:

“It must be remembered that in many of the wards of the City during the late riot, the Irish were the primary, and often only, friends of law and order. That it was The Irish that risked their lives at 43rdStreett and 5th avenue at the Colored Orphan Asylum to save the little children from certain death at the hands of the mob. That many of the police officers injured during riot were Irish, and it must also be noted that Police Officer Paddy McCafferty put his body between the mob and 20 colored children and brought them to the safety of the 35th precinct at great peril to his own life. Further, that to a man, the Catholic Priesthood which is almost entirely Irish in our city used their influence on the side of law and order.” of Irish immigrants, the late Senator Daniel Patrick Moynihan observed 'Everyone is entitled to his own opinion, but not to his own facts.’  This is particularly true for someone who wished to engage in polemics such as Ms. Coulter; otherwise, she is little better than those who incited the mobs during the New York City Draft Riots in 1863."

Read more: Other than relentless crisis, has anything really changed under Donald Trump?