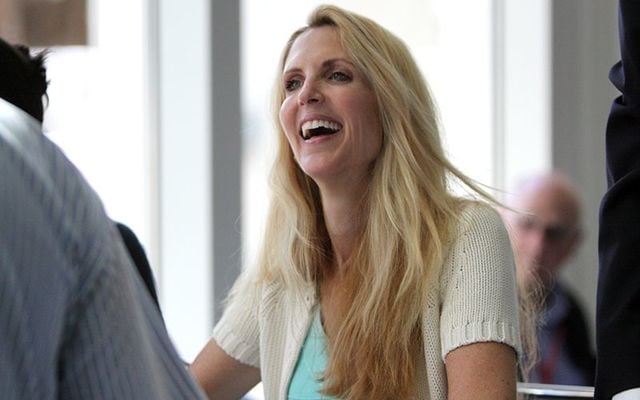 The Irish were the slowest ethnic group to assimilate and took 120 years to become proper Americans and were far more violent than they claimed to be says controversial right wing columnist Ann Coulter.

She  wrote in Breitbart.com  that “the rosy view of Irish immigration concealed the truth.”

She also stated "The Irish were — at one time — among the poorest immigrants we ever got and the slowest to assimilate. It took 120 years, by political analyst Michael Barone’s estimate..."

In the draft riots of 1863, New York City’s Irish exploded in feral violence over the Emancipation Proclamation, fearful that they would soon have to compete with freed blacks for jobs.

Coulter said the Irish used horrific violence “The Irish ran wild, lynching blacks and burning black establishments to the ground. ....the Irish rioters “made a sport of mutilating the black men’s bodies, sometimes sexually. A group of white men and boys mortally attacked black sailor William Williams — jumping on his chest, plunging a knife into him, smashing his body with stones..

Coulter writes that “Luckily for the Irish, there were no ethnic activist groups leaping in to excuse their bad behavior. President Lincoln sent in federal troops to crush the savage uprising.

Coulter also claimed the Irish “ might still be a problem if the New York Times had demanded special rights for them, the ACLU had brought lawsuits on their behalf and the Southern Poverty Law Center had screamed “racism” whenever anyone noticed their bad behavior.

“Instead, no-nonsense Irish priests knocked them upside the head and told them to sober up and go home to their wives. (Back then, the Catholic Church was not about “immigrant rights”; it was about cleaning up their own bums.)"

Coulter concludes by saying “By the 1950s, the Irish were outearning other Americans. Many reformed so well that they became Republicans.”