Anti-vaxxer Antonio Mureddu did not appear on Friday at Ennis District Court in relation to a summons for dangerous driving; a medical certificate submitted to the court confirmed he had "Covid symptoms." 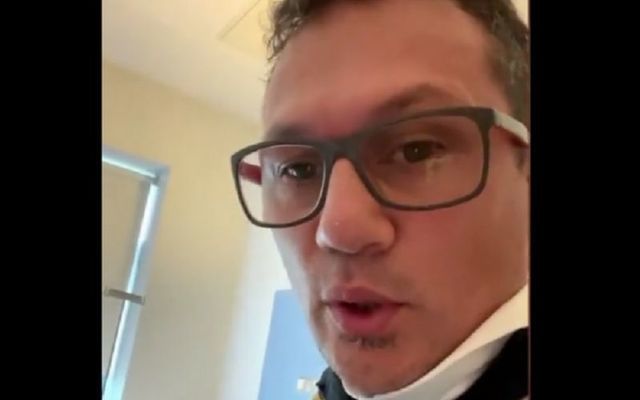 Mureddu, an Italian vaccine skeptic with an address in Co Galway, was due to appear at Ennis District Court on Friday in relation to a summons of dangerous driving on the M18 motorway near Ballymacahill on August 10 last year.

However, a medical certificate submitted to the court on behalf of Mureddu reportedly confirmed that the 45-year-old had "Covid symptoms - flu-like".

Garda Sergeant Louis Moloney applied for the case to adjourn until June 17, when Mureduu will be facing a separate summons. Moloney told the court that the two cases would travel together on June 17.

The dangerous driving summons was initially entered against Mureddu on March 4 alongside two other charges, but gardaí ultimately withdrew the three charges.

Sergeant Moloney withdrew a charge that Mureddu assaulted Garda James Hanley with intent to resist or prevent the lawful apprehension or detention of himself for an alleged offense on August 10, 2021.

Sergeant Moloney said gardaí were also withdrawing two dangerous driving offenses from the same date at Caheraphuca, Crusheen, and on the M18 at Ballymacahill.

Earlier, Mureddu appeared in Letterkenny District Court on Wednesday to face charges of driving without insurance, using a fraudulent license plate, and failing to give information to gardaí at Meencarragh, Ballybofey, on October 23 last year.

Judge Brendan O'Reilly told the court that no hearings would be going ahead following a High Court decision that questioned whether any garda could present a case on behalf of another officer if the prosecuting member was not in court.

Mureddu told Judge O'Reilly that he was "not coming next time" after the hearing was adjourned.

"If you are going to adjourn, this it is going to cost you one million euro. I'm not coming next time," Mureddu told the Letterkenny District Court on Wednesday.

"We are saving Joe's life," Mureddu says in the video. "Today is a winning day for Ireland."

McCarron returned to the hospital a few days later and died there on September 24.

In May, the Irish Independent reported that Mureddu will not face criminal charges in McCarron's death.