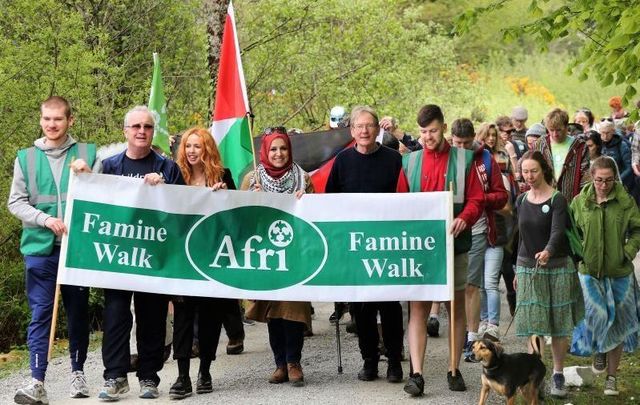 Afri, whose goal is the promotion of global justice and peace and the reduction of poverty, first began hosting its annual famine memorial walk in 1988.

The remembrance walk, which is roughly 11-miles long, retraces ‘a journey of horror’ which local people made through the Doolough Valley on the night and morning of March 30 – 31 1849.

The immediate cause of the death march was the arrival of two ‘commissioners’ who were to inspect the people and certify them as paupers, so entitling them to a ration of three pounds of meal each. For some reason, the inspection was not made and the hundreds of people were told they must appear at Delphi Lodge (ten miles away) at 7 am the following morning. They set out on foot along the mountain road and pathway in cold, wintry conditions, including snowfall.

When they arrived at Delphi Lodge, they were refused either food or tickets of admission to the workhouse and so they began their weary return journey. It was on this journey that perhaps hundreds of people died.

Afri says: “A common thread amongst walk leaders over the years has been the degree to which they and their communities have been affected by violence, weapons, war and climate change.”

Read More: Love during the Irish famine celebrated in new Irish show to premiere on Broadway

As Director of Friends of the Earth, Oisin Coghlan has been a constant and tireless advocate for radical, practical and urgent action and change.

Hanny van Geel, through her work with La Via Campesina, champions ‘the right of people to healthy and culturally appropriate food, produced through ecologically sound and sustainable methods.’

Pete St John is perhaps best known for composing of the world-famous Irish song ‘Fields of Athenry.’ His composition ‘Waltzing on Borrowed Time,’ which expresses his concern for the welfare of the planet, will be performed in music and dance as part of the events on May 18th.

You can listen to 'Waltzing on Borrowed Time' here:

Walkers are asked to gather in Louisburgh at 12 noon on May 18 for registration before the walk begins. Registration is available online. You can learn more about the walk on Afri's website or in the event's brochure.

Learn more about Afri and their annual walk here: